When you write about different news apps and aggregators, the pitches can start to run together — “We do real personalization, we find content beyond the articles in your social feed, etc. etc.” Now, many of those claims may be true, but often I’m left wondering if all the touted back-end technology really leads to a noticeable improvement in user experience.

Well, startup Trapit is launching a new iPad app today, and judging from my whirlwind demo earlier this week, it offers a lot more than just a tweak of what you already find in other apps.

For starters, if you want tech bona fides, Trapit uses the same artificial intelligence (developed by DARPA and SRI) that’s now being used in Apple’s Siri. More importantly, co-founder and Chief Product Officer Hank Nothhaft Jr. tells me that he doesn’t think of Trapit as a newsreading app. Yes, you can use it to catch up on the latest news, but you can also use it to browse a much broader range of content.

Users create “traps”, which are basically content categories that they want to follow. Those can be general, newsy topics like “US politics,” or much more specific, and with almost nothing to do with current events, like “paella”. Trapit claims to monitor more than 120,000 high-quality content sources (to back-up the quality claim, the company says it has blacklisted 10,000 feeds for not meeting its standards), then brings new content to each of your traps.

The experience is personalized, too, based on explicit user feedback and other data points like how long you spent reading the article and whether you shared it. Ultimately, several users could have traps set up for “US politics,” but each of them would see a different mix of content tailored to their tastes. Nothhaft says that in order to deliver content in niche interests, it’s not enough to just point out the articles that are being shared liked, or linked to the most.

“There is no wisdom of the crowd on paella,” Nothhaft says. “Let’s face it, it’s a pretty long tail topic.” 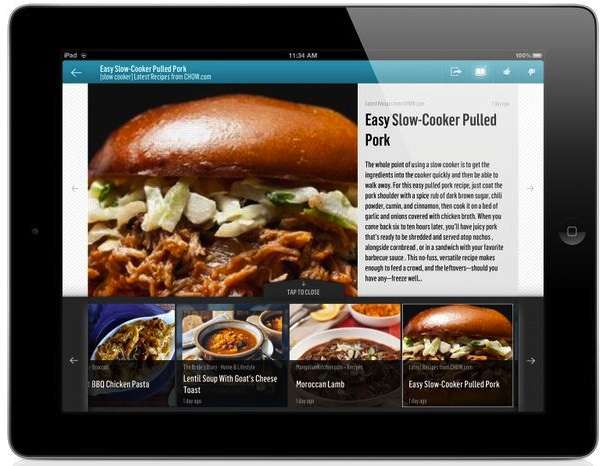 Trapit initially launched on the Web, where it says it’s delivering 5 million articles a day, with 25,000 daily visitors interacting with the content for an average of 16-18 minutes per session. Nothhaft says the team always thought the iPad app would be its flagship product — they wanted to make sure they had a polished app before they had to face “comparisons to dumb news readers and personalized newspapers and magazines.”

Naturally, for the new app, the Web interface has been designed for the iPad touchscreen. It also includes a reading list feature that saves articles for reading offline.

“I’m much more proud of the iPad design than the Web design,” Nothhaft says.

Trapit’s investors include Horizon Ventures and Li Ka-shing. You can download the iPad app here.