Windows Azure, Microsoft’s cloud computing platform, got off to a slow start when it launched in early 2010. It’s clearly gaining momentum now, though. According to Microsoft’s own data, Azure’s storage service, which competes directly with Amazon’s S3, now stores over 4 trillion objects. That’s a big number, but what’s even more impressive is that this is a 4x increase compared to just 12 months ago. Windows Azure Storage, says Microsoft, currently processes an average of 270,000 requests per second, with peaks of around 880,000 requests per second. 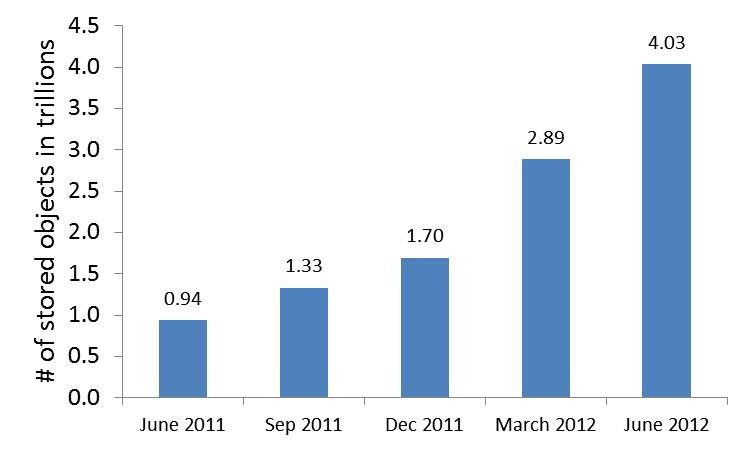 According to Microsoft’s Brad Calder, the company expects this growth rate to continue, especially given that the Azure team significantly lowered the cost of Azure Storage transactions last month.

Just over the last few weeks, Microsoft also added a number of new features to Azure, including Locally Redundant Storage and Geo Redundant Storage, as well as its Azure Virtual Machines that are stored as objects in Azure Storage. These virtual machines can run Windows Server and a number of Linux distributions.

Microsoft is also actively promoting Azure through numerous events ranging from its Imagine Cup student competition to BizSpark and its Azure accelerator program.

As our own Sarah Perez reported in April, Amazon currently says that it hosts about one trillion objects. Back then, Amazon reported that it processed about 650,000 requests per minute. It’s worth noting that Microsoft defines “objects” somewhat differently, which explains the difference in numbers. As Microsoft itself notes, its service “uses a unique approach of storing different object types (Blobs, Disks/Drives, Tables, Queues) in the same store.” It is, of course, also possible that the number is inflated by Microsoft’s own internal use of the service for some of its other products. The fact that Amazon handles more requests than Azure, however, clearly indicates that its S3 service is still comfortably ahead of Azure.