Tout’d, a New York-based startup that describes itself as a “digital word-of-mouth social media platform and referral engine,” today announced that it has closed a $1.4 million seed round led by Warner Hill Angels. This round also included participation by the service’s founders and 25 third-party investors. The company says that it plans to use this money to “accelerate growth, enhance the user experience and further develop the platform interface and functionality.” The service was founded by Wall Street veterans Rob Morelli, Saro Cutri, and 2007 TechStars alumnus Arron Kallenberg.

Warner Hill Angels, the investment firm that led today’s round, “is a venture investment firm funded by a group of accredited investors and advised by some of the country’s best and brightest teenagers.” The group previously invested in a number of small sites and services that mostly focus on college students, including SocialStudies, Crispus Attucks and Proof’t. 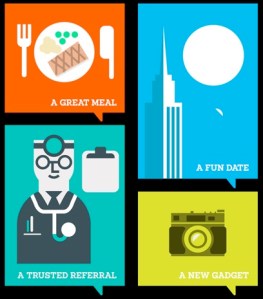 At its core, Tout’d, which is available both on desktop and mobile, is about social recommendations. Users can ask each other questions on the service and recommend each other experiences.

The service, which launched last month, puts an emphasis on privacy and the Q&A sessions remain private. “There are already enough websites out there filled with questionable recommendations from complete strangers,” says the site’s FAQ. Tout’d uses Facebook as a login mechanism but promises to never post anything on its users’ walls without them explicitly telling it to.

After you ask a question on the site, Tout’d will forward your request to all your friends on the service. At the same time, though, it will also look for previously answered recommendations that are similar to yours. Once a week, the service also sends everybody on the site an email with questions that were submitted during the previous 7 days.

Given that most of the activity on the service happens in private, it’s hard to gauge how popular the service currently is.