Facebook and CNN recently announced an ambitious partnership to boost America’s embarrassingly low voter turnout rate with a special “I Voted” app, which will broadcast users’ intent to vote and encourage their friends to follow suit. Unfortunately, it’s unlikely to make much of a difference, since the only known option to dramatically improve voting rates is completely unethical: threaten to publicize if users do not vote.

Clever political scientists have put every imaginable get-out-the-vote tactic through the experimental grinder, from call banks to TV advertisements, and found that shame, rather than persuasion or education, is the most effective way to get civic couch potatoes into the voting booth. Threatening punishment isn’t the only option available: carnivals and face-to-face canvassing work wonders to boost turnout, too. But, unless Facebook plans on throwing a block party for 130 million citizens, shaming users in their friends’ newsfeed is the only option available–and it’s unethical (and, probably illegal). 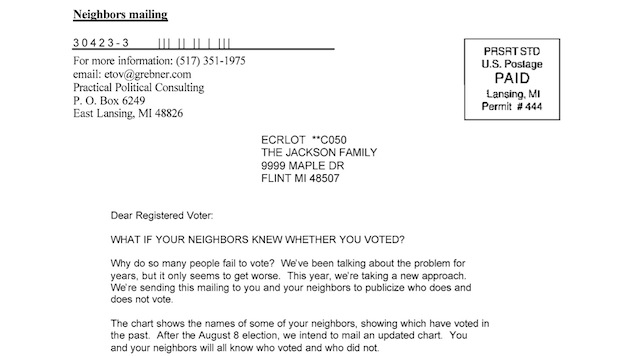 The Facebook newsfeed is a ready-made weapon to implement Gerber and Green’s research, and we sketched a simple concept picture of what this might look like if Facebook decided to throw ethics out the window.

Both Facebook and other social networks have attempted soft peer pressure before: Facebook displayed a rolling count of users who publicize their vote and Foursquare gave a badge to those who checked into a booth on election day. Unfortunately, the perception of a voting norm has little influence on intent to vote, “Presenting the prevalence of college student voting in the last election resulted in a marginally significant increase in students’ intention to vote in the upcoming election,” wrote researcher Carroll Glynn.

Americans, however, are not averse to voting: in the late 19th century, presidential voting rates were consistently above 80% (and, above 90% in some states). Back in the day, elections were filled with carnivals and merriment. Professor Green found that modern day political carnivals can boost turnout a respectable 6.5%–but, at America’s 2008 voting rate of 61%, that’s still not even close to its past glory.

Kudos to Facebook and CNN for using their superpowers to increase civic engagement. But, they’re going to need an army of canvassers and the biggest block party on the planet to really make up for our political laziness.