Fotopedia‘s travel apps have been downloaded over 12 million times since the company’s launch in 2011. Since then, the team has experimented with a number of monetization strategies, including paid apps, sponsorships and – most recently – its own ad platform. Today, the company is launching a partnership with Expedia that will make it easy for Fotopedia users to make travel reservations through the Expedia Hotels iOS app. While Fotopedia won’t comment about whether it is sharing revenue with Expedia, this is such a common model in the travel market that it’s highly unlikely the company didn’t strike a deal with the travel company.

Working with a travel company looks like an obvious choice for Fotopedia (besides the fact that their names are obviously pretty similar). While the company put a strong focus on coffee table book-like experiences in its early days, with apps that often featured thousands of images, it now takes a more magazine-like approach and is launching new but smaller apps at a steady pace. 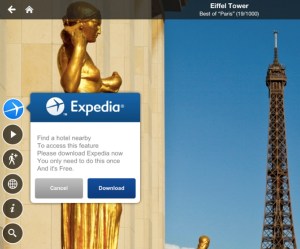 For the time being, these new Expedia buttons in Fotopedia will only appear in the Fotopedia Paris and Japan apps, though chances are the company will expand this feature to some of its older apps and its upcoming releases as well. Expedia, a Fotopedia spokesperson told us, “is going to evaluate how this partnership performs and then they are free to extend it to all of Fotopedia’s upcoming and existing apps.”

In practice, this feature provides a link to the Expedia app when users look at pictures of landmarks. Clicking on the Expedia icon switches the user to the Expedia Hotels app (or opens up the App Store where users can download the app for free).