The current generation of game consoles is getting a bit long in the tooth, but signs point to late 2013 as the earliest that a replacement for either the PlayStation or Xbox consoles will come online. But then something interesting  happened this past week, which could change the way that console makers think about their hardware and software service: Sony bought cloud gaming company GaiKai for $380 million.

Sure, rumors abound about what hardware, chips, and specs these devices will have when or if they’re eventually released. All indications point to about the same type of hardware development we’ve seen in past consoles — including high-performance, next-gen CPUs and GPUs to power even more robust gameplay and graphics capabilities. But if I were Microsoft or Sony right now, I’m not sure I’d be betting on an ever-more powerful box to power its new game platforms. In fact, I’d take a contrarian approach and make as lean of a box as possible, and put all the processing power up in the cloud.

Sony’s purchase of GaiKai could be a harbinger of things to come. For those unfamiliar, GaiKai provides a cloud-based service for accessing more than 40 popular video games online, without the need for any sort of fancy hardware. Early reports pointed to the possibility of extending PlayStation games to other platforms where games could be made available — including mobile devices, tablets, and kiosks — creating a sort of “PlayStation Anywhere” type of service. But I think the impact that the acquisition could have on Sony’s next game console could be even more dramatic.

Console makers historically have relied on the razor/razor blades approach to selling game systems: Put out the hardware at a loss and make money back over the longer term through the sale of games and licenses. In the old paradigm, where they invested heavily in the type of bleeding-edge hardware necessary to power gaming experiences their customers demanded, that meant putting a lot of investment upfront in powerful CPUs and GPUs and seeing the cost of devices go down over time as the manufacturing process hits scale and component costs decrease over time. Roughly speaking, that’s been the general trend. 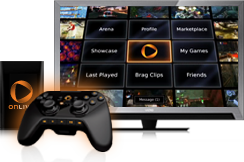 But what if those companies didn’t need to have all the processing rendered in hardware and could instead move the real heavy lifting to the cloud? To be honest, moving gaming to the cloud isn’t necessarily that revolutionary, because there are companies doing it already. There’s GaiKai, of course, but there’s also OnLive, which offers up its own service for playing cloud-based games on your PC, mobile devices, and a $99 streaming box. Also, the company plans to add support for its service natively on some connected TVs and other devices.

It’s that $99 gaming box which appeals to me, though, and it could be a good model for Microsoft and Sony to think about, as they ponder their own new game consoles.

The problem with cloud-based gaming

That said, there are a few arguments against selling a dumb appliance with processing done in the network. The big one is that doing so would dramatically reduce hardware sales in the short term — but that ignores the fact that for the most part those boxes are sold at a loss. No one makes money off new hardware in the first several years it’s released, if ever. Providing a box with just-good-enough connectivity and graphics rendering capabilities, and making it available cheaply, would be a more profitable step and would drive a lot more volume than building some sort of high-powered God Box and selling it for $299.

The bigger problem with cloud-based gaming is that the infrastructure just might not be there yet to support it. Let’s face it, a lot of gamers — even those who subscribe to Xbox Live — are still stuck on DSL connections, which might not support the type of HD-quality graphics game providers would like to build.

More importantly, though, no one has shown that cloud-based gaming can be done at true scale. OnLive has several million subscribers, but its true reach pales in comparison to the number of Xbox Live gamers who sign in daily. Providing the type of computing power necessary to serve tens of millions of gamers all playing at once is a big problem. Despite the GaiKai acquisition, Microsoft might be better equipped to deal with it than Sony, as the software giant has already built a giant virtual computing platform in the cloud with Microsoft Azure. For Sony it would mean a huge investment just to get the infrastructure to support cloud gaming ready.

Finally, there’s the potential cost to consumers, as ISPs begin to roll out tiered broadband plans, which charge consumers more for excessive bandwidth usage. Since games would be streamed in HD, that means a huge amount of bandwidth per month for even somewhat casual gamers. And no one — not Sony or Microsoft — wants to roll out a service which is going to create huge cable bills for their best customers.

At the same time, the potential for a low-cost game console that put processing in the cloud could open up the market for new customers, particularly at a sub-$100 price point. And rolling out with that strategy would allow Microsoft and Sony to create gaming services that wouldn’t necessarily be tied to a certain device, and instead could be accessed even without a piece of proprietary hardware.

Making gaming a streaming service rather than based on the physical purchase of games also opens up new potential business models. Xbox Live already has a membership fee attached, and subscription games — where you get the software for free but then pay a monthly fee to access the game online — are nothing new, particularly in the MMORPG world. But without the need for physical downloads or actual distribution of discs to consumers, subscriptions could become even more popular for cloud-powered games.

I’m just going out on a limb here, and I’m sure Microsoft and Sony already probably have their plans mostly hashed out for the next generation of hardware. I’m just saying, it doesn’t necessarily have to be high-powered or expensive, especially if they want to reach a broader audience at less cost, and sooner rather than later.