Google has released its latest Android developer stats, which show that Gingerbread, version 2.3, at 63.6 percent, remains the single most-popular Android version, based on how many devices have accesed the Google Play app store in the last two weeks. But some number crunching, courtesy of Ben Evans, shows that the newer Ice Cream Sandwich may be picking up some speed.

Google says that in the last two weeks, ICS accounted for 10.7 percent of all Google play visits. But Evans’ calculations indicate that in that time there were actually more ICS than Gingerbread devices added to the overall base — for the first time. In fact, it looks like ICS devices are actually growing in their overall percentage of all active Android devices, while all other versions are seeing declines.

Evans, who is an analyst with Enders Analysis, points out that Gingerbread activations have actually gone down over the last few Android developer reports. On June 1, Gingerbread represented 64.6 percent of active devices; June 15 that became 64.2 percent; and the figures ending July 2 put the number at the current 63.6 percent. 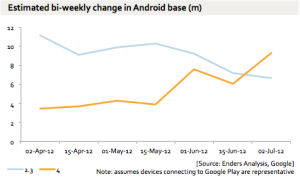 The bigger view comparing ICS with other Android versions shows how ICS is the only one of them that has grown its penetration percentage in the last period, and that Gingerbread may have started its S-curve decline, echoing the one that Froyo in green below has already been through: 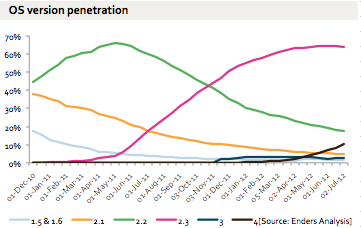 He cautions that this is not definitive, because Google’s version data is based on devices connecting to Google Play, “and we do not know how representative that is of the overall base.” People using forked devices, or those simply not using Google Play, mean that even Google is unlikely to have a definitive answer on version penetration.

“Asking Google for exact numbers on Android is like asking Linus Torvalds about Linux usage. Neither actually knows,” Evans says.

What Evans’ numbers, if accurate, show is that the Gingerbread population is “stale” (Evans word; possible pun intended).

Evans also noted to me, though, that despite this apparent pick-up, ICS is still growing at a rate slower than Gingerbread did in the same period after its launch, especially in the last couple of months: 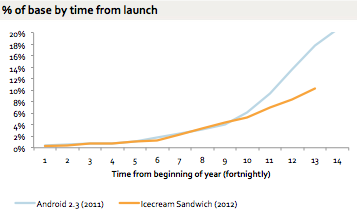 The takeaway here? Well, despite declines, those other OSs are still being sold and used. ICS in total, he believes, now represents about 42 million devices in use, compared to 260 million running 2.3, and 70m still on 2.2, aka Froyo.

Google’s figures for overall handset access shows that, stale or not, Gingerbread is still bar far the most popular Android version, accounting for nearly twice the amount of Google play connections as all other Android versions put together. 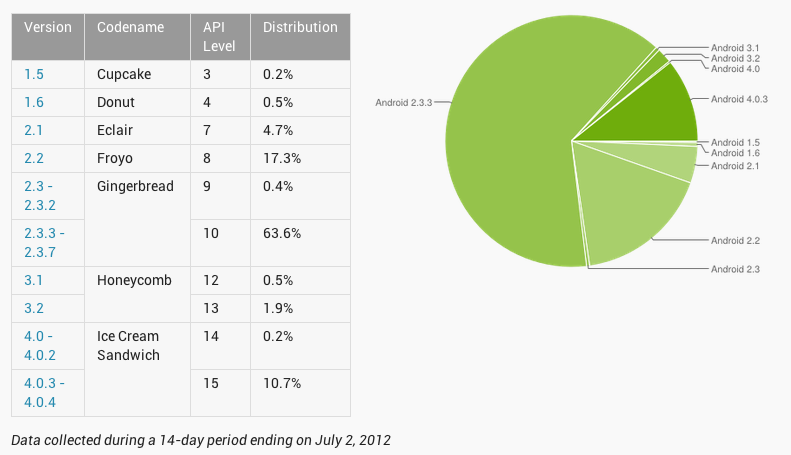 Turning back to sales today, Evans suspects that lower-end devices may still be shipping with the older versions, while ICS has yet to make its way to all handsets and all manufacturers. Some analysts have noted a slowdown in handset shipments — last week Strategy Analytics put the number at a four percent decline worldwide — and in general we are reaching a higher penetration in smartphones: these could also be reasons for why ICS is slowing down in its growth trajectory a bit.

For developers, this looks like a message to continue developing for earlier versions of Android rather than focus on APIs that offer special features that will work only on the later versions: Google notes that all its iterations of Android are forward-compatible.