As promised at this morning’s Google I/O conference, Google has launched a version of its Google Drive application on iOS today, which offers native support for the service formerly known as Google Docs on both iPhone and iPad. The app is live now in iTunes, and looks to give competitor Dropbox a run for its money.

Although Google Drive has offered a mobile web version of its service for some time, many people prefer using a native application on their smartphones or tablets. This is somewhere Dropbox has previously excelled, but it no longer has that same advantage after today. 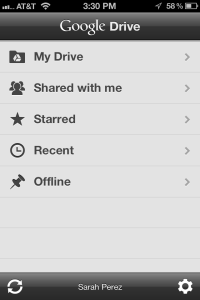 Where Dropbox uses the more traditional iOS layout of having buttons at the bottom of the app (for Dropbox, Favorites, Uploads and Settings), the Google Drive application uses the layout popularized by Facebook involving a button at the top left which you tap in order to slide the screen over to the right, revealing the navigation.

At first launch, the app starts you on a homepage where you can access your drive, your shared files, starred files, recent files, and those you’ve made available for offline access. This structure mirrors what you would see when logging into the service on the web, so it’s easy to quickly orient yourself and find your way around. As you move in between screens, you can return to the navigation screen at any time by hitting the top left button. 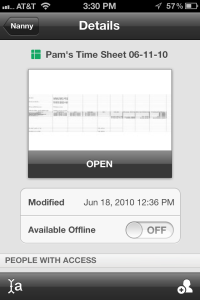 When viewing your Drive, the app lists your folders first and then your files, all in alphabetical order. From the main screen you can star files or tap an arrow to be taken to the Details screen. (Tapping on the file itself, of course, opens it). The Details screen is an important one to get to know because it’s here that Google has tucked away one of Google Drive’s key features: offline access.

By default, all your files are not available offline – you have to tap the toggle switch to turn the feature on. This is done on a file-by-file basis. If that seems inconvenient due to your large number of files, you’ll probably want to organize them into a folder so you can switch on offline access for the entire folder instead.

Editing files is not as smooth as you may like. For now, you have to open Google Documents and Spreadsheets in Safari to make changes, using the button at the top right of the screen. When edits are complete, you have to hit the device’s home button and re-open the app. You also can’t create new items in the app nor can you upload from the Camera Roll (see last section for more on that) or the phone’s storage, which is a plus for Dropbox. However, you can rename files and open and view file types beyond Google Docs, including image files, movies, txt files, PDFs, and all Microsoft Office files. These can be opened with a variety of apps you may have installed on your device, including competitors like SkyDrive, Evernote, Dropbox and Kicksend, for example.

The sync between the desktop and Drive was not exactly real-time, but it was very quick. I uploaded a photo on the PC, hit the “sync” button in the app and a few seconds later, it appeared. (I admit I pressed the button a lot. I’m impatient). The search functionality was also really fast and is able to pull up results even when the keyword was found within the document, as opposed to the title. OCR support was shown off during the demo today, with a picture of a tax form as the example use. In practicality, OCR is far more useful for simply making PDFs searchable. It’s also a big advantage over Dropbox’s more basic search functionality.

One thing I was itching to try out was whether or not the image search feature demoed on stage would also work in the app. Google’s Clay Bavor had searched for the keyword “pyramid” and Google Drive returned pictures of the Egyptian pyramids. I attempted to reproduce this on iPhone but used this photo, which seems like a good example of pyramids. I named it “Egypt,” however. Google Drive’s search function didn’t find it. Bummer. Apparently, image recognition may be hit or miss. 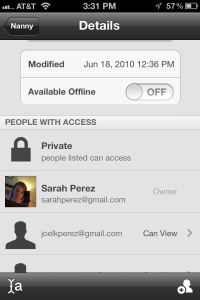 Another big plus to the new iOS app is the ability to collaborate on files from within the application. On iOS, however, this means the ability to share files with collaborators within the app, not real-time collaboration. Instead, you can add collaborators by email address from the Details screen. By default, they will have “view” access (read-only). To allow them to edit, you’ll need to tap on their name again in the Details screen and then change their permission level. You can also revoke access from this screen, too.

Although you can’t work with someone else in real-time, every time you open the file, it will update with the most recent edits. So the workaround for now would be to close the file, and then re-open it to see someone else’s changes that took place in the meantime. Collaboration on Dropbox works in a similar way. Users can share folders and files with individuals, groups or even publicly with the world, but collaboration is not real-time.

However, the biggest threat to Dropbox and other consumer-friendly file storage alternatives is the price. Where Dropbox charges for anything outside of 2 GB (not counting the upgrades from referrals), Drive gives you 5 GB for synced and uploaded files for free, and doesn’t count those created or converted to Google Docs format. You can buy more storage here. Additional pricing plans for Dropbox start at $9.99/month for 50 GB and go up from there, while Google offers  [Update: this is the plan I’m on, but just realized it’s no longer available to new upgraders], 25 GB for $2.49/month or 100 GB for $4.99/month. Dropbox may now need to come down in price in order to compete now the Google Drive is native on iOS.

That being said, Dropbox still has one clever trick – in addition to supporting uploads, a newer feature of the app allows it to automatically upload the photos from your camera roll and gives you up to 3 GB of extra space for doing so automatically. Google still has a confused message around photos, however. Today, it still maintains its flickr competitor Picasa separately, while offering a similar kind of instant upload feature like Dropbox has via its Google+ native apps. At some point, the company needs to make all these things work together a little better. If it’s a “Drive,” then the expectation is that it should also help your find your Photos, too – you shouldn’t have to launch a separate app for that.

Google Drive is a free download from iTunes here.