Murphy’s Law — or some jaded users might just call it Yammer’s law: One day after Yammer announced that it got bought by Microsoft for $1.2 billion, the enterprise social networking site went down. It’s been down for at least an hour already and is covering several geographies, from what we can see. Update: Yammer had problems for a little over two hours, a spokesperson told TechCrunch: fully down for 20 minutes and then “a period of slowness” after that.

The crash will not do any favors to Microsoft, which plans to integrate the company into its Microsoft Office division to be part of a wider, integrated social and cloud push from the Redmond, Washington software giant.

I’m in London and have been noticing the spinning wheel for about an hour, although Eric in San Francisco tells me he’s seen his Yammer go up and down in that time. The “Down For Everyone Or Just Me” site also agrees:

We’re reaching out to Yammer to find out what is going on.

For those who are regular users of the Yammer closed-enterprise social network, this may be familiar territory: the site has had some downtime issues before, although this one has to be the crash with the best (worst) timing of them all.

While Microsoft’s purchase of Yammer brings to it another way for the company to enhance enterprise communications — and fits in well with other past acquisitions like Skype — the deal also potentially brings in millions of existing Yammer users that Microsoft can link into more of its existing cloud-based collaboration services. Reliability issues like these, however, damage that proposition. 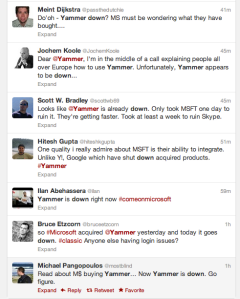 One user wonders if Yammer’s crash has to do with extra-high traffic to the site today, although this didn’t seem to be a problem yesterday when the news was first announced.

Update: A Yammer spokesperson tells us: “Yammer experienced an outage today at approximately 6:24 a.m. PST for 20 minutes, followed by a period of slowness and was back to normal by 8:34 a.m. We are still determining the cause of the outage.”