With Google and Apple making back-to-back announcements about their new mapping efforts in the last few weeks, Microsoft obviously felt a bit left out. Today, however, the company is launching its largest imagery release in its history: Bing Maps today features a full 165 terabytes worth of new data that spans about 1 million square miles. What’s maybe even more interesting, though, is that the Bing Imagery Technologies group completed its mission to cover 100% of the U.S. with aerial photography in June and that the company expects to hit the same 100% milestone for Europe this fall. All of this imagery will be published by the end of 2012. 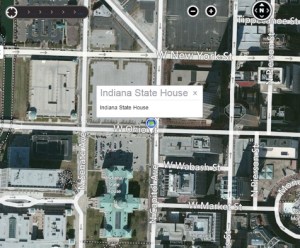 As Microsoft notes, “a challenge for consumers and enterprise organizations using web mapping services has been that much of the imagery featured there has historically been a patchwork of satellite and aerial imagery of different vintage, quality, clarity and detail.” With the “Global Ortho” program, which Microsoft launched in 2010, the company aims to provide 30cm aerial blanket coverage of the U.S. and Europe to provide users with a consistent mapping experience. In today’s announcement, Microsoft also noted that it takes about 16,500 compute cores and about 55 petabytes of storage to run Bing Imagery Technologies’ software that stitches all of these photos together and prepares them for publishing.

3D maps, the one area Google and Apple have been focusing on, is something Bing offered a long time ago through its Virtual Earth 3D program. These days, however, Microsoft doesn’t seem to be putting too much emphasis on 3D and has been focusing more on its bird’s-eye and aerial imagery instead. It’s worth noting, though, that it’s that kind of detailed aerial imagery that Microsoft is currently collecting that makes these new 3D maps possible, so it wouldn’t come as a surprise if Microsoft also got back into this game sooner rather than later.