The VoD service Netflix has been leading a charge for consumers to watch more on-demand, digital video — with its service aggregating TV and film content from a number of media players now attracting more than 25 million subscribers, and bringing new audiences to that content. But just how much of an impact on traditional, physical sales are digital companies like Netflix making if they were to grow even further?

Quite a lot, it seems. According to one account of a presentation made last Friday by Dan Heaf, EVP and managing director of digital for BBC Worldwide (the BBC’s commercial arm), Heaf reportedly said that if everyone got their BBC content via services like Netflix at its current subscription rates — the equivalent of $7.99 or £5.99 per month — it could wipe out 80 percent of BBC Worldwide’s revenues. To be clear, the BBC, which didn’t invite media to the event, has denied the percentage. But it does admit that its digital business is less profitable and generates less revenues for it right now as they transition away from more traditional forms of media, and that is driving the company to find new ways to grow that digital business:

Heaf’s reported comments were made last Friday, at an event to mark the launch of BBC Labs, a new incubator/mentorship program to find innovative (and potentially revenue-generating) digital content services. Fostering startups with good ideas to spin BBC content is one route for the BBC to shore up digital returns as physical sales continue to erode.

“These additional revenues will ensure that we can continue to invest more into original content which we make available around the world.  We continue to collaborate with existing partners while also searching for and supporting new ones hence the launch of BBC Worldwide Labs,” says the spokesperson.

The launch of BBC Labs comes at a time of change at the corporation: on Friday it was also announced that Jana Bennett would step down from her role as president of Worldwide Networks and the Global BBC iPlayer, as part of a larger reorganization where global product divisions have been replaced by regional divisions.

While the BBC uses partnerships such as the one with Netflix to increase its reach and find new audiences, it’s also looking to build out its own direct offerings further. Its iPlayer service, initially developed as a free offering for UK audiences only, is now available as an app (free with in-app purchases) in 16 countries, and there is talk of a further commercial product, built as more of an iTunes rival, covering a wider catalog of current and archival programs. However, Project Barcelona, as the service is called, may be facing some problems: according to this report from paidContent, there is some conflict between BBC Worldwide and its parent over how such a service would get implemented and who would run it.

In the meantime, the BBC’s partners in expanding its customer base worldwide continue to grow their own offerings to woo consumers. Netflix, in a kind of arms race against Amazon, has been building up its content relationships to make itself more attractive to consumers — and as its scale grows it is bound to have better leverage in its negotiations with content companies. The latest of these incremental steps was actually taken by its rival: Lovefilm, Amazon’s UK subsidiary, announced today it has signed a large deal with 20th Century Fox.

There are others looking to become more involved as well. Google TV just yesterday announced that it would finally be breaking ground in the UK, in a TV partnership with Sony. Google is likely to make more TV announcements this week during its I/O developer event.

BBC Labs could be one route for the BBC to look for innovation and new services for the future that it offers itself, widening what it does beyond basic program delivery.

The BBC is taking a wide approach to the Labs project. It says it will consider early-stage startups in web applications, gaming, virtual worlds, mobile, advertising technologies, advanced video applications, connected TV, community and collaborative software and CRM, “to name a few.”

The Labs project is a six-month program aimed specifically at startups in the UK — ultimately five will be chosen for the program, and the aim is to help selected participants “gain traction and scale by working closely with them with the objective of helping them strike a commercial partnership with BBC Worldwide.”

No equity stakes are taken, and no actual cash funding will be passed along. Instead, “We… focus on promoting innovation through mentorship and access to the varied resources of BBC Worldwide.” That includes marketing, sales, advertising and legal help, as well as free office space at the BBC Media Centre, technical resources and mentoring and networking events.

BBC Worldwide’s most recent financial figures in its annual report indicated that in 2011, it made sales of £1.15 billion ($1.8 billion) overall. Within that, digital entertainment accounted for only 2.3 percent of revenues, or £27.1 million ($42 million), compared to £14.5 million in 2010. Overall digital brought in £81.9 million across all of the BBC. Digital entertainment; however, it still made a loss of £6.8 million ($10.6 million) — although that was significantly down on losses of over £17 million in 2010. (2012’s figures will be out next month, a BBC Worldwide spokesperson tells me.)

There is a clock ticking on how the BBC will leverage digital in the long run. Currently the BBC still makes much more in revenues and profit from physical video sales, largely in the form of DVDs. In 2011, this business brought in £192.3 million ($300 million), with profits of £43.3 million, according to the annual report, but sales are slowing down: that was only £1 million in more in profit over 2010.

Heaf’s remarks on Friday underscored the trend we’re seeing here: he projected that DVD would remain a revenue stream for another 10 years, before it got killed off by VOD. 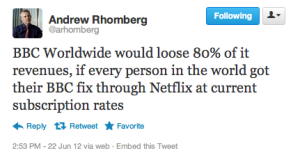