Unikey Technologies, a company made known by ABC’s Shark Tank for technology that turns your smartphone into a universal door key, has raised $1.1 million according to an SEC filing. The amount appears to be in addition to a $500,000 equity stake raised from Mark Cuban and Kevin O’Leary earlier this year on the season finale of the program.

Once the Unikey locking system is installed in a door, any paired Android, iOS, or BlackBerry device can unlock it. The system is not dependent on an app, but rather the system unlocks the door by simply detecting when the phone is in the immediate vicinity. “As long as I’m in range of the lock, I can control it,” said Unikey founder and CEO Phil Dumas on the show. 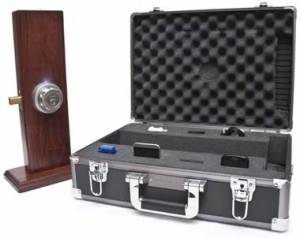 Cuban and O’Leary were rather enthusiastic about the company and Dumas accepted $500,000 in exchange for two seats on the company’s board and a 40% equity stake. This was after one of the show’s other sharks, Robert Herjavec offered $1,000,000 for  a whopping 75% of the company.

As Dumas explained on the show, his background is in biometric security and while at Sequiam Corp, helped launch the first mass-market biometric residential deadbolt. As we’ve probably all experienced, biometric security is anything but foolproof. There are a lot of points for potential failure. This led Dumas to develop Unikey as a more reliable and convenient system.

With Unikey, a paired phone simply needs to be next to the door to gain access. Plus, the company promises a robust user management system allowing owners to quickly grant and deny access to other phones — there’s even a scheduling system to allow access during only specific times. A standard key still works with the system, too.

The Unikey is not yet available for purchase or pre-order. However, there’s a form on the company’s website to reserve a spot in the pre-order line and you may want to put your name down. Unikey tells TechCrunch that they’ve had tens of thousands of sign-ups since appearing on Shark Tank.

If you don’t mind dealing with several minutes of ads, you can see Unikey’s Shark Tank footage by clicking to the 28:42 mark. Sorry, the video is U.S. only, but it’s not my fault. Yell at ABC for locking down their videos.