Ready your arsenal of funny viral videos, Sean Parker and Shawn Fanning have just launched their video chat and sharing network Airtime. Built on Facebook with a stunning $33.5 million in funding, Airtime puts you onstage with a friend or matches you with an interesting stranger. There’s no application to install, it works straight from your browser. [Update: And today at the celebrity-filled Airtime launch party, Parker told me that iOS and Android apps are “coming very soon”.]

You could call it a more fun version of Skype, a one-on-one Google+ Hangouts with your Facebook graph, or the evolution of Chat Roulette. But what you’re going to call it is fun. Pull in a favorite YouTube video or select one you’ve already shared to Facebook and instantly you’re watching together. It feels simple, intimate, and casual — like you’re actually interacting in person.

As I wrote this morning, Airtime will re-humanize the Internet. Give Airtime some Facebook permissions and you’ll see all your friends who are online fill up a buddy list on the right side. Click one your friends and you can send them a personalized invite to meetup on Airtime delivered via Facebook Chat. If they’re not available you can send them a sort of video voice mail. If they do click through, your webcams activate and you each appear on half of the screen, video chatting in real-time.

But Airtime doesn’t just reinforce your social network, it expands it. You can choose to be matched with someone new but who has similar interests, mutual friends, or lives nearby.

Once you’re connected, you’ll see the Likes from your Facebook profiles below the video feeds with your mutual interests highlighted in green. Click the Airtime button between you and you’re shown a feed of shared characteristics and friends that serve as conversation starters.

You can geek out about a band you both love, or teach each other about something you’ve never heard of. Airtime goes beyond small talk. It lets you forge deeper relationships with both strangers and those you thought you already knew. 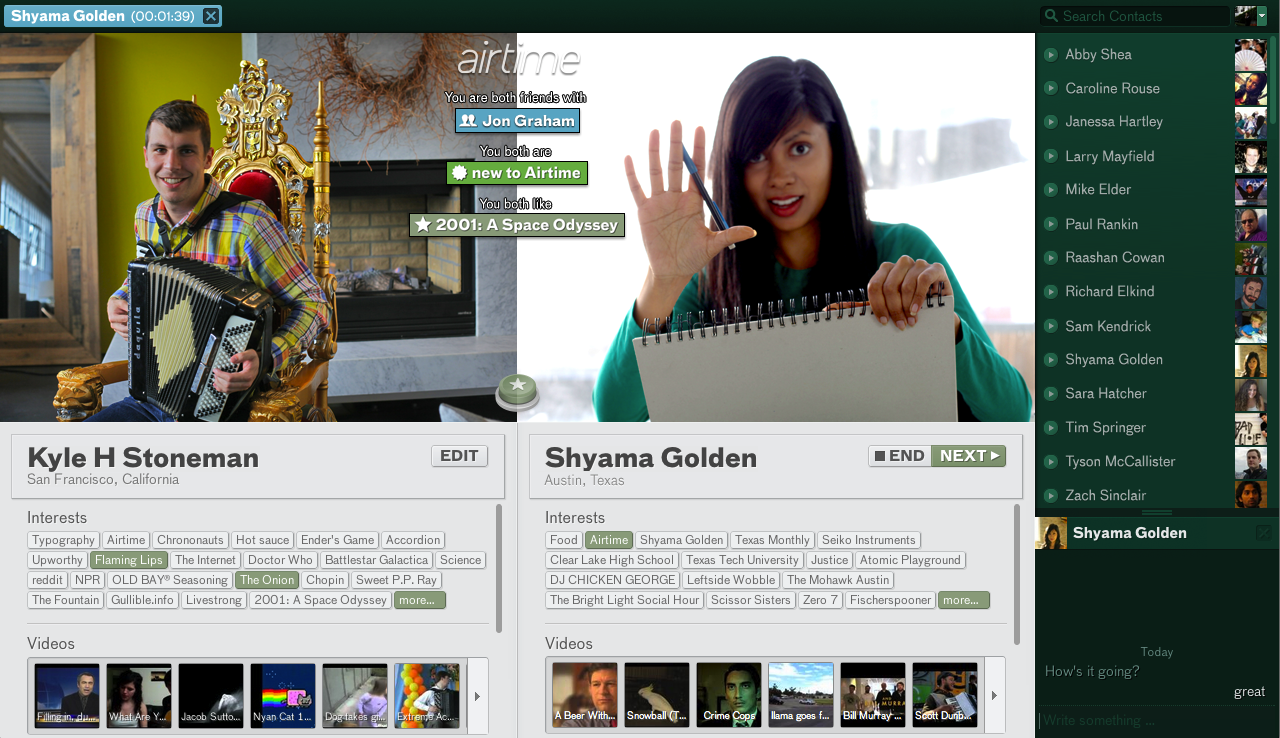 Where Airtime really shines, though, is in video sharing. All the videos you’ve posted to Facebook are displayed as thumbnails beneath your interests. Click one and your webcam feed goes picture-in-picture, and you and your conversation partner watch the video clip together as well as each other’s reactions in real-time. Show off the funniest videos you know, share home movies you’ve uploaded, or get smarter watching something educational together.

At anytime you can hit “next” to get paired with a new partner. But if you’re really having fun, you can reward your conversation partner by wailing on a litte “star” whammy button. Your partner will earn achievements and badges that appear in their profile, but more importantly, it will improve their credibility rating on Airtime. That means they’ll get matched with more desired partners, like celebrities or other people proven to be fun to chat with.

For now Airtime is just one-on-one chat, but group chat and the option to carry on multiple tabbed conversations at once are on the way. Live music listening and photo viewing integration may emerge too. Parker even tells me that Airtime is building an app platform so developers can create their own games, utilities, and more. You see before Draw Something, there was the offline game called Pictionary. You could actually build Pictionary on Airtime.

What makes Airtime actually usable, unlike Chat Roulette, is authenticated identity and a one-strike abuse policy. While your interests are shown, your name and biographical details other than your current city are kept private unless you share them. And since it’s built on your Facebook identity, if you show your naughty bits and get flagged by your partner or discovered by the site’s human moderators, you’ll get banned.

As Parker said in his presentation at the launch this morning in New York City, one of Airtime’s core principles is “no penises” before switching it to “safety”. It’s even safe enough for family-man Mark Zuckerberg to try it out in a nod to Parker, its co-founder and Facebook’s former President. 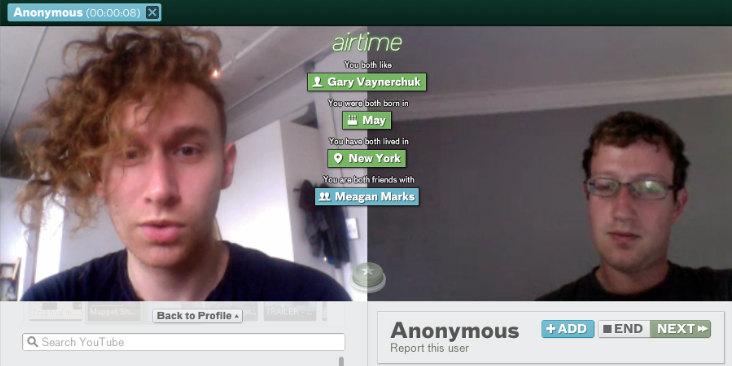 Airtime will have to battle it out with FaceTime which is already on mobile, and Google+ Hangouts which already supports group chat. Apple and Google are tough competitors, but since Airtime doesn’t require an expensive device or a G+ account, it could thrive with the long-tail of users, including the YouTube generation of kids who are much more receptive to video communication.

When you think of hanging out online, right now you think of scrolling endless feeds of updates or aimlessly surfing the web solo. That means amongst a sea of connections, you can actually feel like you’re alone. But it doesn’t have to be that way, and that’s why people could end up spending a lot of time on Airtime.

For more on Airtime, check out:

Face To Face: How Airtime Will Re-Humanize The Internet

And the official promo video…