According to the IDC, 17.4 million tablets were shipped worldwide in the first quarter, with the lion’s share (68 percent) of those being iPads. As the iPad’s popularity has grown, it’s begun to find increasing adoption in the enterprise and among IT decision makers. As a result, some companies are looking to find better ways to utilize the iPad’s interface and unique display to present and visualize business data in more exciting and engaging ways.

Roambi, one of these slick new business intelligence (BI) apps, is finding success enabling companies to transform their snooze-inducing Salesforce, Oracle, or SAP data (i.e. BI data) into interactive mobile dashboards, snappy charts and sexy graphs, and instantly deliver them to the iPad. 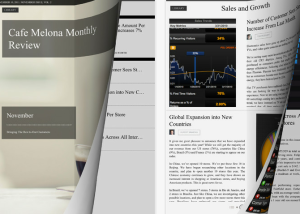 Designed with the iPad interface in mind, those reports really look more like magazine-style publications, but based entirely on the custom content you provide. (Not unlike a BI data-version of Inkling.)

And today MeLLmo (the creator of Roambi) is taking its functionality one step further, moving from simply being a content creator to becoming a distributor and publisher as well, by launching a new platform that enables organizations to deliver analytics and multimedia content to anyone with an iPad. In other words, the key value proposition for the new platform is that companies can now not only create interactive reports in Roambi Flow, but actually turn those magazine-style reports into apps that can be published on the App Store, with customer logos, etc.

The platform also includes new licensing and features that give businesses the ability to distribute their custom Roambi reports both internally, just to staff, or externally to customers and consumers. They can also create and distribute co-branded materials in a single issue or series as iPad apps, saving money by removing the need to hire specialized designers, and, in turn, extending the reach of their brand thanks to the App Store’s massive, built-in user base.

As an illustrative example, an analyst firm, say, could upload a PDF, automatically transform it into a Roambi Flow document (i.e. a flip-style magazine for iPad), add interactive analytics, photos and videos, and then publish it as their own app on the App Store — either for targeted customers or open download.

What’s more, companies can do this over and over, ad nauseum, publishing a bunch of separate apps or creating multiple editions within one. That company could also use its distribution mechanism to continuously publish the most up-to-date sales presentations for their sales force, for example, or use it as a marketing tool, publishing brochure-style content for open downloading.

In addition to its platform launch, the startup is today introducing Roambi Pulse — its tenth visualization tool for the iPad — which allows users to compare key performance indicators in animated, vivid display. By embedding historical performance of key metrics within interactive titles, users can swipe and tap their way through (what are presumably) more compelling and engaging insights. A Roambi Pulse sample can be found in the free Roambi app now available in the App Store.

MeLLmo raised $30 million from Sequoia in its first round of institutional funding back in September. 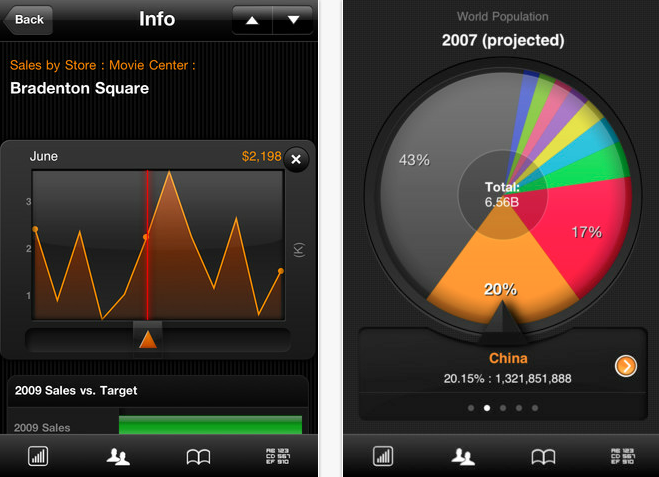