One trend we’ve been tracking is the “Internet of Things” — the idea that at some point, all devices will be intelligent and connected, allowing for things like whole home automation. The problem is that most new systems equipped to connect to the Internet are reliant on proprietary software and hardware tacked on by the vendor. So whatever devices do come to market Internet-ready tend to be overly expensive, and don’t play well with others.

That’s where Electric Imp comes in. The startup was founded on the premise of decoupling all the connectivity and intelligence for these connected systems from the devices themselves, and instead, letting those applications be powered by a single tiny chip, lovingly called an “Imp.” 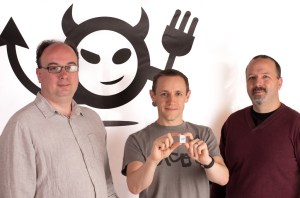 The startup was founded by CEO Hugo Fiennes, who was engineering manager on the first four iPhones, along with former Gmail designer Kevin Fox and software architect Peter Hartley. The Los Altos-based company has seven employees currently, but is looking to expand to 20 within the next six months. To spur that growth, it’s raised a $7.9 million round of financing from Redpoint Ventures and Lowercase Capital.

The Imp looks like an SD card, but is much more powerful — it contains Wi-Fi and an embedded processor — and can be programmed to control or measure any matter of things, based on the type of device it’s inserted into. For consumers, Imp cards will cost about $25 a piece, but can be put in or taken out of compatible devices at any time, depending on how the consumer wants to use them. There will also be a very small monthly subscription fee for consumers who take advantage of Imp-enabled services. While final pricing hasn’t been quite worked out yet, the founders are thinking about a fee that is “less than the cost of a latte” for use of up to 20 Imps in one home.

But before the Imp becomes a mainstream consumer product, hardware vendors need to actually adopt the platform and start adding Imp-compatible slots into their devices. The pitch to them is that, for less than a dollar they will be able to add a slot and create powerful new applications for otherwise dumb devices. 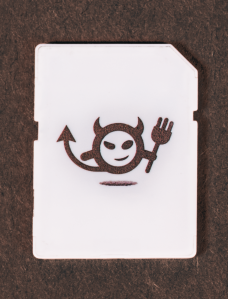 And they can do so without having to worry about hiring specialists to integrate connectivity into the device or increasing the cost of their products by adding Wi-Fi or processors that are otherwise unnecessary. Electric Imp will provide the enabling hardware — the Imp card — and it also will manage the back end service which connects all of the devices. Imp-enabled devices can be controlled either from a web browser or on a smartphone, either through Electric Imp’s own application, or through third-party apps that are developed to take advantage of the new platform.

Fiennes demoed a number of applications to me yesterday, all of which take advantage of the mix-and-match nature of the Imp cards. Users can remotely control lights, or set energy-hogging devices like washing machines to run at times when the cost of power is lowest. You could hook up a monitor to measure moisture in your garden, which could then be wired to the Internet and connected to weather reports to ensure that all your plants are watered appropriately. Or you could set up motion sensors which not only turn on the lights and other devices, but also to monitor when people enter a room and can send alerts if there’s unusual activity — say, someone walking in when no one is usually home, or if an elderly relative hasn’t gotten up and gone to the kitchen by a certain time.

The possibilities really are endless, especially when you consider the number of devices which don’t have connectivity now, because it’s too expensive, but could benefit from some smarts and the ability to monitor and control them from afar. Just as importantly, the Imp could enable hardware from multiple manufacturers to work together, rather than having to rely on a single vendor for a home automation system that requires a major upfront investment and, frankly, probably won’t be updated or age well with time. And because the smarts of the device can be updated from the cloud, manufacturers will be able to remotely monitor and update their products seamlessly, without consumers even knowing.

Electric Imp is already talking to some vendors about integrating its Imp slots onto upcoming hardware devices, and will be shipping a developer preview bundle in late June to give manufacturers all they need to prototype and test out new applications.