Simple (formerly known as BankSimple), the startup with $13.1 million in funding to build a better banking experience for customers, has today introduced its first mobile application, surprisingly ahead of its public launch. Operating in private beta/invite-only mode for now, co-founder Joshua Reich says that anyone with a Simple account can now use the app, which had been limited to TestFlight distributions since its private launch last November.

With the iPhone app, Simple says the idea is to create something that’s on par with the online banking experience, not “an afterthought.” The iOS app lets you use all the tools you could on the web, and access them in a way that’s mobile-friendly. Everything is tappable, and there’s been a focus on making it quick to see the most critical info – nothing is more than a few taps away. Plus, after signing in, you don’t have to continually enter your username and password – instead, the app is protected by your 4-digit PIN code. And another nifty feature – you can deposit checks by taking a picture of them – something you can’t do on the web. 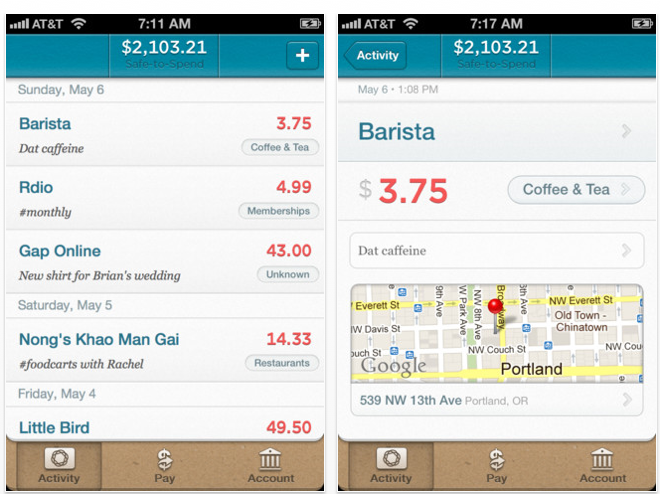 Simple has been covered by the media quite a bit, despite the fact that the service still operates behind closed doors – a testament, perhaps, to the growing desire for, as they say “a bank that doesn’t suck.” To be clear, however, Simple is not actually a bank – it’s working with FDIC-insured financial institutions to hold customers’ money, while it operates the user-friendly front-end for money management.

Reich acknowledges the demand for the service, and tells us that there are now over 100,000 folks on the waiting list, and Simple is letting people in on a first-come, first-serve basis. He says they’re not sure when they’ll finish with the invite list and open up to the U.S. public.

Any way to jump in line, we asked? “Either become an employee or marry an employee,” Reich joked. (Well, crap).

The company was co-founded by Reich (CEO), CFO Shamir Karkal and CTO Alex Payne, the latter a notable hire following his announcement that he was leaving his role as Twitter’s API lead to join the team. And, as noted above, the company has raised a good chunk of funding, too, with a $3.1 million round in September 2010 and a $10 million round in August 2011.

As for the service itself, customers can do all the usual things – make purchases, pay bills, earn interest, set up and track savings, view transaction history and more. But the big idea here is not the what, it’s the how. Simple, as you can guess by the name, wants to make things, well…simple. Transactions appear instantly, you can see your balance and “safe to spend” amount at a glance, and you can send payments to friends, too.

Simple is also different from other banks in that it doesn’t profit from fees – there are no overdraft fees, late fees, or domestic transfer fees, for example. In-network ATMs are fee-free, and there’s no extra charge for using an out-of-network ATM (although the ATM’s bank might charge you). In the few cases where there is a fee (e.g. international transfers are around $15), Simple just passes on the cost, but doesn’t add on top of it.

Reich says the startup is targeting the U.S. market for now because banking regulations vary widely from country to country, but an international rollout is on the long-term roadmap for the company. At present, the Simple customer base tracks national demographics pretty closely, he says. “We are seeing that customers earn above average incomes,” says Reich. “The median customer is 29 years old, college educated, and fully employed.”

And with this iOS app released to the wild, what comes next? “We’re hiring Android engineers right now,” says Reich.

If you’re one of the lucky few, you can grab Simple’s iPhone app here. Everyone else, sign up and wait.