Last year, we wrote about Copious, an eBay-like marketplace that leveraged your social graph on Facebook. The site aimed to use your social graph from Facebook to make the marketplace experience that you’d find on Amazon or eBay more social, allowing buyers and sellers to see if friends in common, previous purchases, social reviews and more. Today, the company is launching a new version of its marketplace, focused exclusively on fashion and with a number of new personalization features.

Copious now asks shoppers who join the site to connect through Facebook or Twitter and to follow five trends that fit their style, everything from color-blocking and vintage wear. You’ll also be suggested people to follow on the site that match your chosen trends. By following trends and people, shoppers will get a more socially curated experience every time they visit.

In addition, Copious will used this information to give users suggestions of products sold on the site that match their personal style. In particular, the startup says it is focusing on allowing popular fashion bloggers the ability to sell some of their looks on the site.

In terms of the merchant experience, you can still see how many followers a merchant has, who has liked and bought from the merchant, photos and more.

Copious, which raised $2 million in funding from Foundation Capital, Google Ventures, and BlackBerry Partners Fund, was founded in January 2011 by former Mobshop CEO Jim Rose, Critical Path VP of mobile strategy Rob Zuber, and former Facebook head of marketing Jonathan Ehrlich. All three worked at MobShop, which was a group-buying site that launched during the bubble.

Since testing the new version of the marketplace, Copious says it has seen a 100% increase in user engagement on the site and a more than 250% increase in month-over-month transactions. The company has also integrated Pinterest into the shopping experience, allowing users to pin their favorite items on the site.

Facebook and commerce don’t necessarily go hand in hand. Some e-commerce ventures who have leveraged Facebook as a platform for buying have flopped. But other reports point to a potentially lucrative model in integrating Facebook into the shopping experience. Clearly Copious is hoping to be part of the latter group. 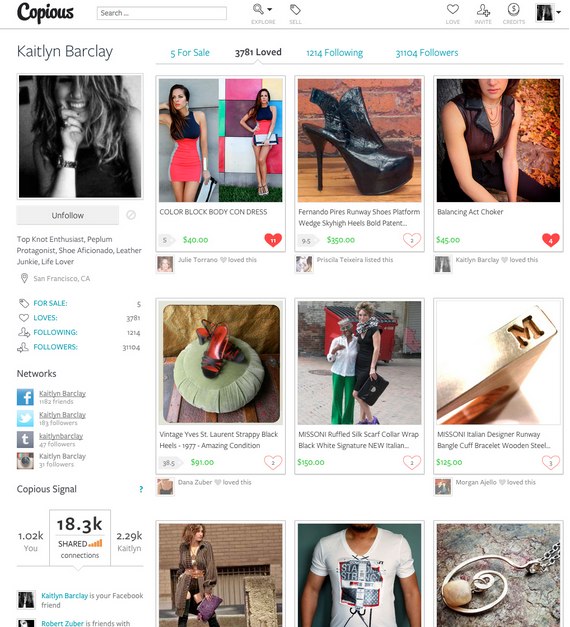