Similar to Google’s new Account Activity dashboard, the company is now expanding its data-crunching ways to another popular Google service: Gmail. With a new tool called “Gmail Meter,” you can now know everything there is to know (well, almost) about your Gmail usage.

Using the Meter, you can learn about things like how many emails you’ve sent, received, starred, replied to, and you can see your daily traffic charted out, which can help identify spurts and drops.

A traffic pattern bar graph also shows which days you get more email, and a pie chart of categories shows you how much email is stored in your inbox vs. your archive, and how much is labelled or deleted.

Other features help you count words in your emails, thread lengths, or identify which senders and receivers you communicate with the most. 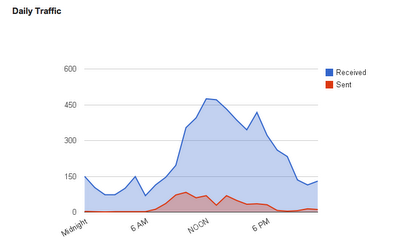 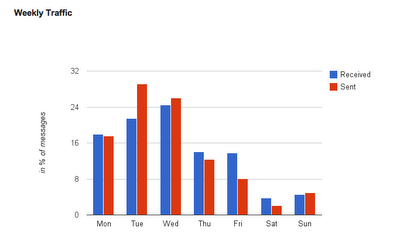 How does any of this help you? Well, maybe if you’re planning to take a day off from email, you could better determine which day that should be. But mostly, it’s just a little fun navel-gazing. Which, really, given the 10,000+ unread emails you’ve got there, you might not actually have time for.

The tool was built by Romain Vialard, a Google Apps Script Top Contributor, and is  powered by Google Apps Script. It’s not a new feature in Gmail itself, to be clear, and requires a bit of set-up. (See the Gmail blog for the how-to or just watch the video below).

The one thing it lacks? Any sort of tools that could help you figure out how to get less email. Oh well!

Update: Lots of reports of the tool hanging on install. Apparently, everyone wants to know about their email usage. Maybe Google needs to throw some more servers behind this thing.