Two gadgets enter, one leaves. It’s that simple. Welcome to the TC Gadget Review Battle where two competing products are pitted against each other. No wishy washy conclusion based on an arbitrary numbering system, just a reliable buying recommendation.

These two speaker docks couldn’t be more similar. They both use the same overall design, have nearly identical feature sets and the same $399 price tag. But one is a Sony and one is a Logitech. Well let’s get to it: The Logitech UE Air Speaker vs the Sony RDP-XA700IP.

These are AirPlay docks. They’re designed to sit on a shelf, look pretty, and blast music streamed from an iOS product. That’s all they do. For better or worse, these $400 speaker docks lack any other feature besides the arguably trivial feature of a 3.5mm input on the backside. Both lack an FM tuner, digital display, or on-board EQ functions. A remote ships with the Sony, though.

This feature-lite philosophy actually works well in this case. All the functions besides power and volume are tasked to the docked iDevice. It further enforces the draw of AirPlay in that the speaker is just that: a speaker. The real power lies in the iPhone or iPad.

Both speaker docks claim to work with iPhone cases. The Logitech is much more friendly to cases with a taller dock connector. The Sony doesn’t work with anything thicker than a thin bumper. 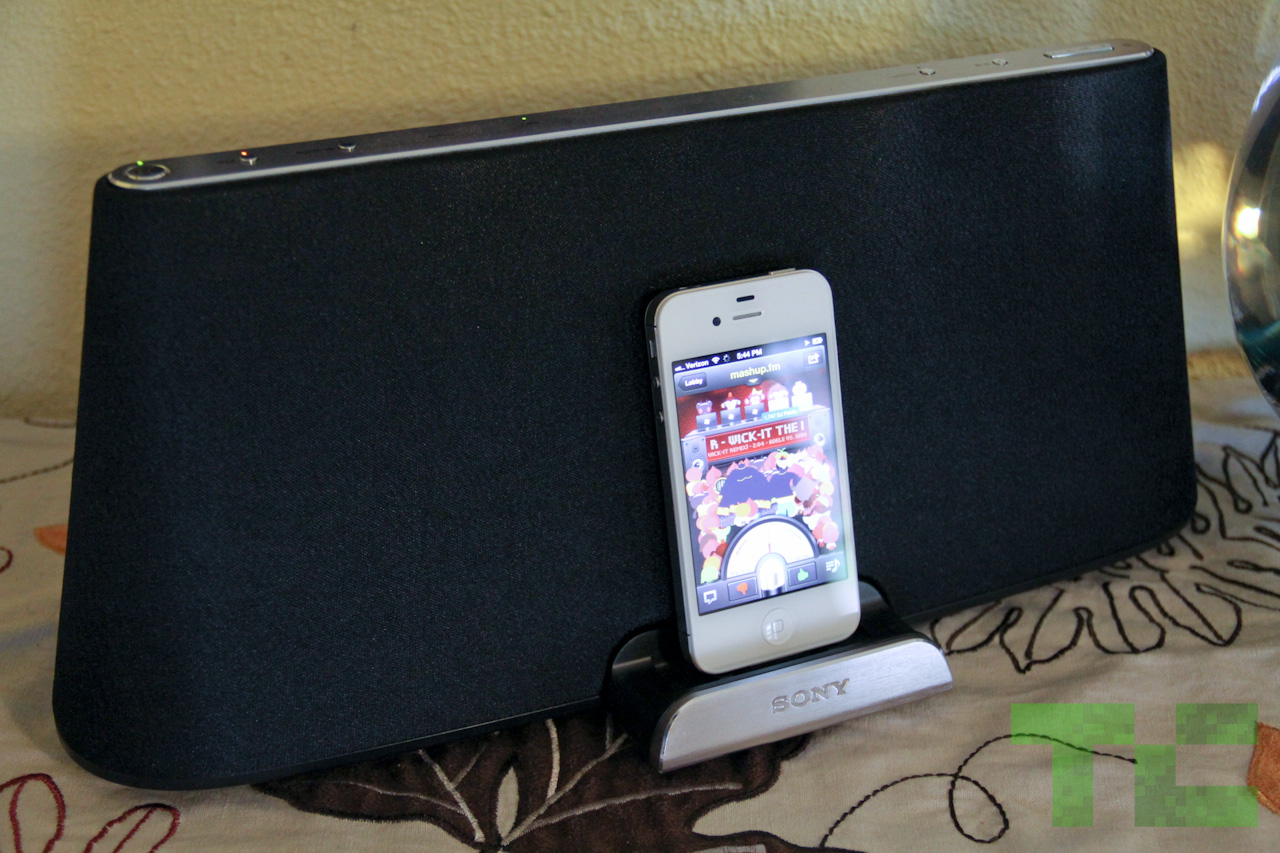 Sony knows design and it shows. The RDP-XA700IP is gorgeous with a slight strip of metal on top of the hefty dock. It’s the perfect size, really. At just 15-inches long and 7-inches tall, the footprint isn’t substantial enough to eat up space on a table but at the same time not small enough that a docked iPad looks out of place. Conventional wisdom would suggest that an iPad would block the sound but it doesn’t thanks to the large port sitting opposite of the iPad. 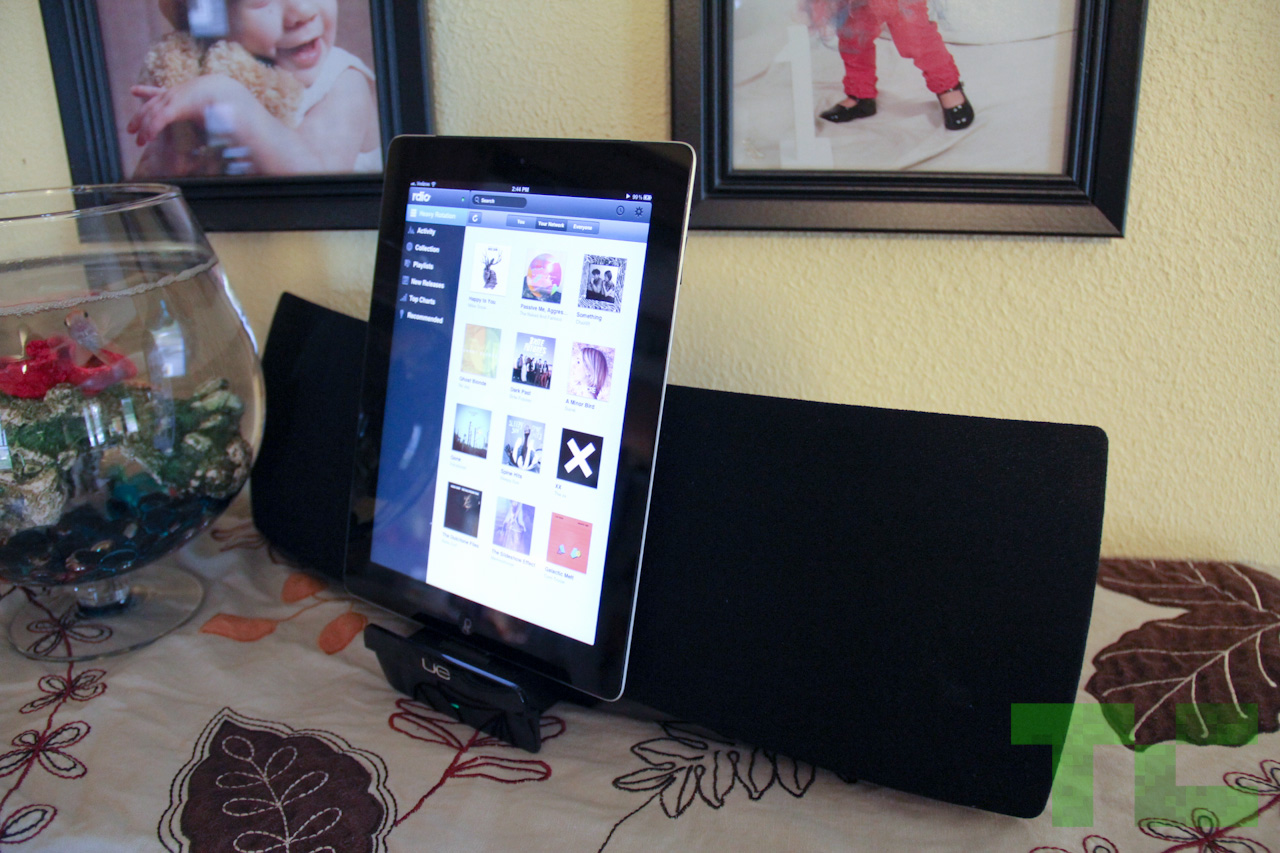 The Logitech looks cheap in comparison. Its outer shell is comprised mostly of lightweight shiny plastic and the whole thing feels underwhelmingly light. The extra long casing doesn’t seem to improve the overall sound dynamics; it’s just a waste of space. That said, I do prefer the volume dial on the Logitech verses the rocker buttons on the Sony — volume controls should always be a round dial — but the Sony looks and feels like a $400 kit where the Logitech does not.

Both of these models have retractable docks. The Sony’s dock deploys with a measure of confidence. A gentle inward push causes the dock to extend with the hiss of a high-end automobile component. The Logitech’s snaps out with the same elegance as a plastic plaything.

The magic of AirPlay is often in the absolute lack of setup required. Once these speaker docks are on a local network with an iDevice, they’re instantly available for media streaming. However, the Logitech is a lot easier to set up.

It only takes downloading an app and running through several screens to set up the Logitech model. It’s idiot-proof. With the Sony, the owner is still prompted to download an app when docking for the first time. However, Sony’s implementation isn’t as clean and straightforward as Logitech’s. The app is much cleaner.

If the iOS app fails to work, both speaker docks can be connected to the local WiFi network through WPS.

With such a small feature set, sound quality is the most important factor in this comparison. It’s the only deciding factor between the two docks. Thankfully it’s an easy decision. The Sony is the clear winner but the Logitech still sounds fine.

The Sony RDP-XA700IP produces a surprising amount of bass, which is often sorely lacking in desktop speakers. The stronger low-end helps dramatically. I dare say the Sony RDP-XA700IP is the best tabletop speaker dock I’ve heard — including the B&W Zeppelin. The sound is deep, rich, and very satisfying at both high and low volumes. The confident bass will make items on your desk dance around.

The Logitech fails to produce the same rich sound. It lacks a strong low-end response, making the sound much more flat and lifeless. At high volume levels the little bass it does have starts to clip and distort. This is not a party speaker.

It’s pretty rare nowadays to find two products just so similar. The physical differences between the two amount to nothing more than design decisions and meaningless quirks. The Sony is a bit smaller, comes with a remote and is harder to set up. The Logitech on the other hand is very easy to setup and is more friendly with iPhone cases.

But these are speaker docks. Their primary lot in life is to reproduce sound. On that thought alone the Sony wins by a magnificent mile. It produces sound that’s much more rich, bold, and accurate. It easily rivals high-end 2.1 speaker setups with a powered subwoofer. The Logitech is flat and muffled in comparison. Superior sound wins over easier setup and a more friendly dock connector.