Hey look: another private, micro social networking service has just launched. From Alt12 Apps, which moms know better as the maker of the BabyBump app, there now comes a new mobile-only private social networking service for parents called Kidfolio. The app, which is celebrating its public release today, offers parents tools for private sharing – mainly photos of children – which can be organized into a scrapbook-like timeline by ages and stages.

Along with the launch, the company is also announcing it has closed its seed round of $1.26 million in funding, led by Aydin Senkut’s Felicis Ventures, with participation from InterWest Partners and other angels, including HealthTap founder Ron Gutman, plus Othman Laraki (Twitter), Matt Wyndowe (Facebook), Julia Popowitz (Facebook), Ron Bouganim (Branchnext), and Rob Leathern (XA.net).

The trend towards micro social networking is growing, with apps like Path, Pair, and yes, one could even argue Instagram (at least when compared with established social networking leader, now owner, Facebook) offering users smaller communities and more private ways to connect with each other outside of the reaches of Facebook’s enormity.

While it was easy to call out Instagram as the established leader of the social photo-sharing space, other verticals are only now really being explored. One such vertical is private networking for parents and families. There have been many attempts to establish smaller social networking alternatives to Facebook with a family angle, including things like Everloop and Togetherville (acquired by Disney), but those have been focused on the kids…and they ran on the desktop, not mobile.

On smartphones, apps like RedRover, for example, have tried to network parents, but the focus was more on establishing a community for playdates and the like.

While certainly a number of apps, like Path, can be used with families, that’s not their over-reaching goal. They still go broad. But those most interested in the zillions of kid photos you take (ahem, guilty), are more likely to be family members – grandparents, sisters, brothers, cousins, aunts, uncles, etc. Plus, older family members are sometimes not even on Facebook, are relatively inactive if they are, or are generally confused by the service’s numerous features.

But many of those older folks are getting smartphones – in fact, half the U.S.’s mobile users have a smartphone now.

In other words, there’s room to experiment in the mobile-only, family social networking space.

She also adds that there’s definitely room to experiment on mobile.

“Existing ‘parenting social networks’ such as BabyCenter do not use the phone, they’re web views crammed into the thin shell of a mobile app,” she says. “This [the native mobile experience] ultimately leads to much higher reuse, engagement and addiction.”

On her company’s other apps, being mobile has been key to getting users to return. “Our daily ‘sticky factor,’ which is defined as the ratio of daily actives to monthly actives, is over 25% compared to most parenting social networks, which are less than 5%,” she says.

As for Kidfolio specifically, well…it’s alright. It’s no Path in terms of its design, but it’s not awful either…maybe just a little generic. It’s still trying to network parents to other non-family members through community features (advice, forum-like “Groups,” etc.), so it’s not really laser-focused on the family-only vertical which would be a more risky (but interesting) endeavor. 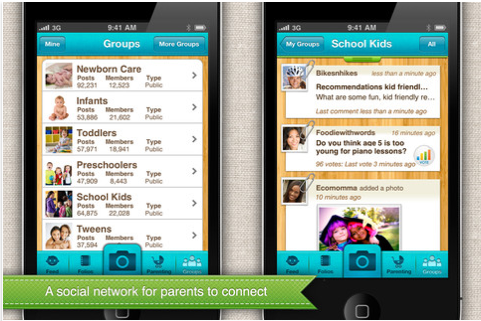 It’s also pretty clearly targeted towards moms, not dads. (Dads are parents, too! And they do share photos of kids! Why can’t anyone build something for them?) Wong says, however, that about 10% of the app’s users are dads, and they’re working on adding more features for them. For example, an upcoming feature called “deep following” will deliver real-time notifications which Wong says had been popular in BabyBump to connect dads deployed overseas to their families back home. (e.g. real-time messages about contractions, the birth, etc.)

Much of Kidfolio’s content is reminiscent of MomsLikeMe (now shuttered), minus the local, plus the mobile. (I always thought MLM’s big miss was a lack of mobile focus, for what it’s worth). But it also adds more modern features like photo filters, videos, and a postcard feature that will convert photos to snail mail (via Postagram maker Sincerely). 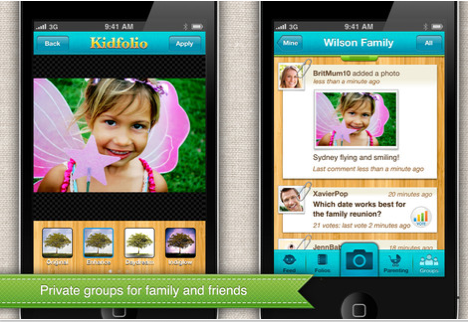 Given the company’s former niche success with BabyBump and PinkPad – they share about 4.5 million downloads (split 50/50) – Kidfolio could do fairly well.

But the real question is whether or not there’s enough Facebook privacy backlash to fuel these micro networks into bigger players in the space, as Instagram became.

As for Wong, she believes smaller networks are the future. “We feel that social networks today lack context. Most developers try to make apps that are too broad. They are photo sharing or event sharing or whatever, but they don’t help direct the user to a specific context. The next wave of social networks will add context, either self-selected (e.g. Pinterest) or intentionally by design (Alt12).”

Kidfolio is available now for iPhone. The Android app is in the works, and the web version is in development now.