As VoIP, chat, and web-based videoconferencing solutions expand their reach, we’ve seen a corresponding growth in both the remote workforce and telecommuting. Not only that, but these technologies are beginning to disrupt education, as startups like Khan Academy, 2tor, ShowMe, Udemy, Lynda.com, and the Minerva Project are all showing how video and advanced web platforms can turn distance learning into an elegant and truly valuable supplement (if not alternative) to learning.

However, while these startups (and more) offer distance learning options in the traditional academic sense, many people are interested in pursuing other hobbies or activities, like, say, boosting workout regimens, or learning how to cook, or box, or how to draw your favorite cartoon characters. However, the problem is that we’re all busy, and it can be tough to find the time to sign up for those classes at the gym, and, while YouTube likely offers some instructional videos in the category of your choice, there’s a lot of noise, and the experience is far from personalized.

That’s why a New York-based startup called Powhow is launching its public beta today, which aims to allow anyone and everyone (with a webcam) to find and take classes in subjects like fitness, cooking, music, arts, DIY, and crafting from curated rosters of professional, credentialed instructors all over the world. During its private beta, over 600 students and instructors have been using Powhow to bake souffles, learn to play heavy metal guitar, sew bikinis, and sculpt abs.

“To have questions answered live, in realtime will boost incentive to finish what you start, and actually build proficiency in a subject,” says a student who participated in fashion designer Angela Kane’s workshop on learning to sew t-shirts and jeans.

Of course, you may find yourself saying, “wait a second, what about Skype? What about Google Hangouts?” And it’s true, both of these services offer live, multi-person video chat. Plus, there’s Citrix, Vokle, AnyMeeting, or GoToMeeting — and many more.

But while tools like these offer a full range of town hall-style video broadcasting, webinars, and video conferencing, they’re mostly built from the ground up for businesses. The presentation tools and their UIs are configured for meetings, or to run PowerPoint presentations. And while Skype and Google Hangouts are more consumer-facing, intended for both casual and professional use, they don’t offer the kind of back end tools that instructors and teachers need to run actual businesses. 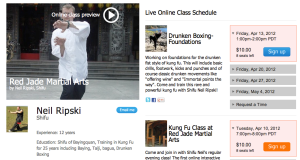 When we caught up with Powhow CEO and Co-Founder Viva Chu, this is something he stressed as the key to Powhow’s business. The platform isn’t just a landing site for a suite of standalone hobby-classes, the startup is hand-picking quality, credentialed educators, working with them individually to launch full-scale web (and video-based) businesses. That’s why, beyond offering live classroom and recording video capabilities, Powhow offers instructors tools that enable them to post, schedule, and track classes to stay on top of which classes are full, which are open, and send reminders, do pre-class prep or follow-ups with their students.

Powhow classes aren’t free, but they’re generally pretty affordable, with most coming in under $50. So, the platform allows instructors to accept credit cards and issue refunds (securely), get reports on how much they’ve made, with the ability to compare to instructors with similar classes, as well as social tools that make it easy to promote classes on YouTube, Facebook, Twitter, etc.

On the other side, all students need is a webcam, an Internet connection, and a credit card to participate. Students can join classes just to observe, and add their scheduled classes directly to iCal, Outlook, or Google Calendar. In that sense, Powhow is trying to build a destination platform that addresses the pent-up demand for fun, hobby-based instructors — and a public, online marketplace in which to conduct (and participate in) live classes.

To get it off the ground, Powhow recently raised a seed round of financing, led by Inspiration Ventures. Powhow has several patents pending, including one for  the combination of tools an instructor uses to create and manage their classes.

Powhow was co-founded by Viva Chu and his wife Agatha Chang, who decided to build Powhow after struggling to schedule fitness classes with their favorite instructors. Chu is a serial entrepreneur, having previously founded Handipoints — a virtual gaming community for families — that he sold to Slide, which was then acquired by Google in 2009. Chu became Head of Product Marketing and Strategy at Slide/Google. He also sold Transplay, an early in-game advertising company in 2004 to Massive Incorporated, which was later acquired by Microsoft. The entrepreneur also invented and patented a system for in-game ad placements and virtual commerce.

It’s still early in the game for Powhow, but the team is definitely hitting on an intersection of spaces that are currently exploding. There’s definitely a market for this kind of live marketplace for video-based classes, of course it’s all about ensuring users that its teachers are top-notch and providing enough of a diversity in classes and subjects to keep people interested and returning to the site.

It seems that there is an opportunity for Powhow to become the Etsy for hobby-based instructors, offering a virtual, pop-up storefront by which to sell their classes, track analytics, and create real relationships with their students. That last part will be key to creating long-term value.

For more, check out Powhow at home here. 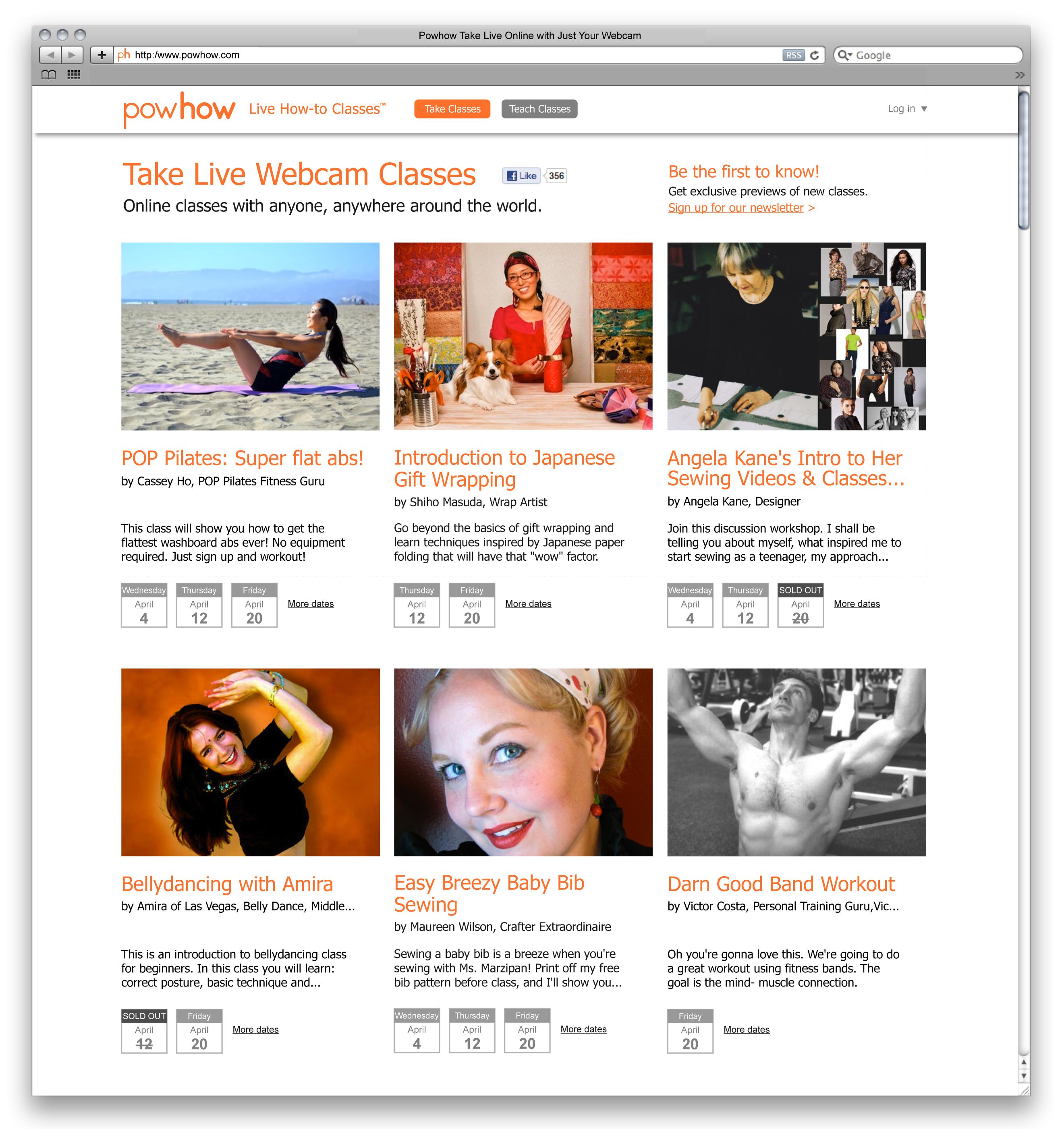