FLUD, the scrappy news reader backed by $1 million in seed funding, is today introducing FLUD 2.0 for Android and Windows Phone. FLUD 2.0, for those who don’t recall, was the big redesign that turned FLUD from being just another news reader into a true social news experience.

Although participating in a crowded space, where it goes up against better-known brands like Flipboard, Zite, and Pulse, FLUD founder Bobby Ghoshal believes his company has what it takes to stand out from the crowd. Not only is the startup building its own social network – as opposed to one built on top of Facebook or Twitter – it’s now also doing so cross-platform.

“If you look at the news space, there are about 600 applications that do RSS reading, but a lot of them become cookie-cutter, just bad experiences,” says Ghoshal, who also happens to be FLUD’s designer.

In developing the new apps for Windows Phone and Android, the idea was to customize the experiences to showcase the features of their respective platforms, while adhering to the design guidelines of each. 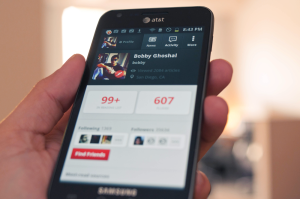 For example, the Android app takes advantage of the contextual controls option at the top. And, in the Windows Phone app –  the way it uses tiles, the panorama view, the big blown-up logo at the top – all the features were meant to make it feel like a native experience. “It looks like the application came pre-packaged with the phone,” says Ghoshal. “Ultimately, that’s the goal. If you’re building for an OS, you need to go all in on the OS,” he says.

Ghoshal also talked about how FLUD does social in a way that sets them apart from some of their competition. For example, Pulse.

FLUD, like other social networks based around content (as with Spotify for music, Instagram for photos, etc.), uses the friend/follower model. When you follow people on FLUD, you’ll be able to track the news they find interesting. This feature, however, still needs some work. It’s not as easy as it could be to find your friends, or even the newsmakers whose opinions you respect. For the latter, the delay to implement, at least, was intentional.

Says Ghoshal, the company wanted to wait until they went cross-platform before they began to highlight any sort of featured users on the system. However, the feature has been in development for a month and half now, so it’s sure to arrive soon. After all, if they could roll out two new apps in the time between the December launch of FLUD 2.0 (which introduced social on iOS) and today, they must be pretty speedy over there.

Another thing the company has in the works is a mobile web version of the service that will work on any mobile browser. That’s something that the company believes will help it expand internationally to markets in Asia, India and China, specifically, as well as into Africa, which Ghoshal sees a big opportunity given the mobile penetration there. (More phones than desktops!, he says).

The company has come this far – 3 platforms, and a major update – on its $1 million in seed funding, and now it’s raising a Series A round of $5 to $8 million to internationalize the service and to build out the team accordingly.

The new mobile apps are available for download here.