When you publish on Tumblr, you can now auto-share your post to the Facebook News Feed and feature it prominently on your Timeline. More Facebook referral traffic will be the result of these improvements as well as Ticker and Timeline sharing of your Likes and replies that were announced today. Importantly, though, the posts you read won’t be auto-shared.

By giving Tumblr posts their own structured, Open Graph data type rather than classifying them as standard links, your Tumbl’d cat memes, hipster photos, and random thoughts will stay visible even after you post Facebook status updates and other content.

Tumblr writers can enable the new features in their Tumblr settings. If you turn all the features on, your Tumblr replies will get pushed to Facebook. All your Likes of other posts will too, but Tumblr notes “They even get lumped together so they’re not overwhelming!” Our commenter Max Wolf confirms that the integration works with both Facebook profiles and Pages, so you can aut0-syndicate your published posts to either.

One thing that won’t be auto-shared is what posts you read. That type of Open Graph integration has boosted virality for news sites like The Guardian, Washington Post and Facebook’s new enemy Yahoo. But unlike mainstream news sites, Tumblrs run the gamut from family-friendly to very NSFW. Auto-sharing of what blog posts you read could therefore offend and embarrass, so its smart that Tumblr is keeping that stuff private. 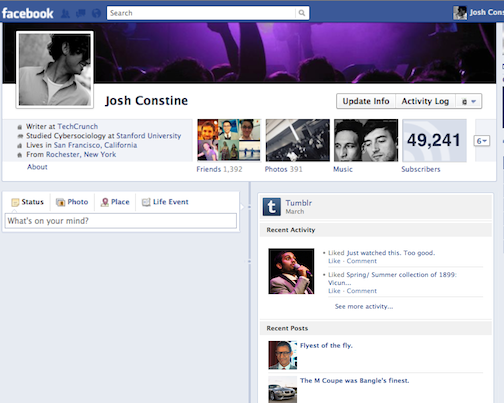