So you’re in town to follow up on some weak leads and your boss says you’ve got to stay put for a few more days because there’s an old lady out near Patton Road who is looking to buy and you call back and say you got to get back to HQ for some paperwork and your boss says “Make the most of it.” The only thing that counts in this world, friend, is getting them to sign on the line which is dotted. Am I right?

So you need some new leads, or at least some new people in your Rolodex. That’s where marGenius comes in. You import your Google or Microsoft address book and calendar (don’t worry, nobody else can see it) and it figures out if there are people you need to see and talk to near you, right in town there. Doesn’t matter if the lady near Patton Road’s crumb cake is from the store. You got four more new leads out of marGenius and you can give them a call or even schedule a meeting right from the app and ring a ding ding you’re up on the big board again, at least for a while. 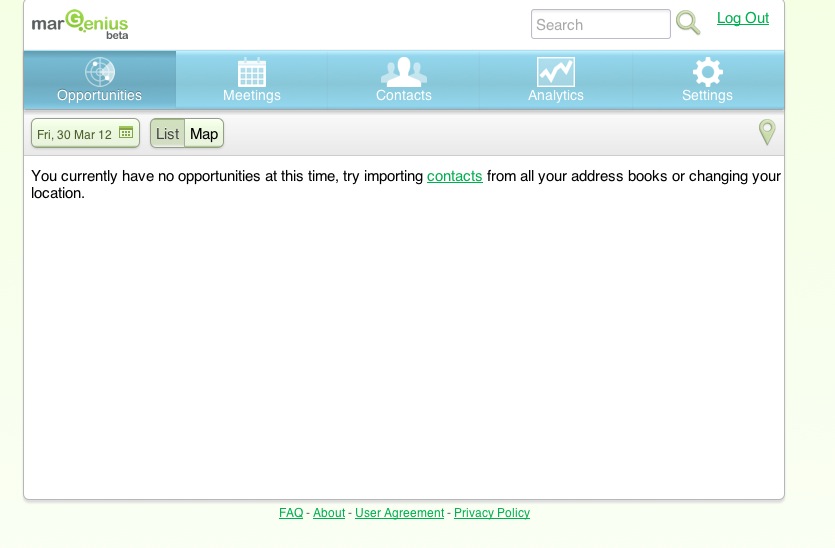 Founded by a small team in DC led by Saurabh Dharia and Sundeep Sanghavi, the app came about when the team members recalled ending up stranded in a strange city after a cancelled meeting. Instead of drowning their sorrows in Old Fashioneds, they decided to build a system that would ensure they never waste time out in Cedar Rapids again. They needed a method to network on the fly and thus marGenius was born.

Although not every meeting set up through the app will bring cash into the company, the networking opportunities it encourages are presumably priceless.

Unlike “free” social networks, marGenius is aimed at actually getting you some business, so they will eventually charge a small fee for use. You can use the app to plan trips, as well, by entering the name of a city you’re about to visit. Using marGenius’ opportunities engine, you can then figure out who’s who on the ground.

The app is in beta and supports data imports from Gmail, Hotmail, and Exchange. CSV support is forthcoming. And next time the boss asks you “You call yourself a salesman, you son of a bitch?” you can keep your head held high and your chin up and your eyes open and you can say to him “Yeah, I think so. And I know so, too, so stuff it.”