Flash is a main technology that developers use to power social and casual games, but Adobe has struggled to make money from its popularity over the years. Now, the company is planning to charge a 9 percent revenue share for higher-end Flash games that make more than $50,000 in revenues — and many developers aren’t happy.

First, here’s what it’s going to offer. It just announced a new set of features for developers who create very graphics-heavy games with the launch of Flash Player 11.2. It also unveiled a partnership with Unity Technologies, the Sequoia-backed company with a popular gaming engine that powers titles like Mika Mobile’s Battleheart.

This could bump up the overall quality of browser-based games, considering that the new version of Flash has powers to tap into hardware for rendering 3-D graphics.

But if you read the announcement closely, Adobe reveals its plans to start charging a revenue share for high-grossing games. It affects developers who call two APIs: one that provides access to domain memory, and one that’s for hardware acceleration. 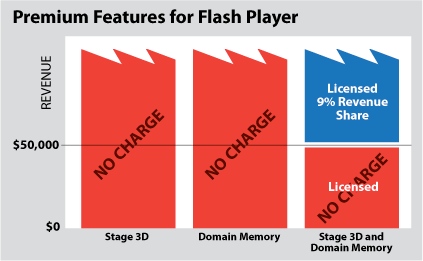 At face value, it could make sense. If Flash is going to power higher-end, browser-based games that come closer to console quality, Adobe is going to have to find a way to fund the research and development costs behind it. Plus, Adobe is under pressure from shareholders to move away from selling one-off versions of the Creative Suite and Photoshop and towards more of a software-as-a-service model. One could make the argument that a revenue share actually better aligns Adobe’s interests with those of the game developers.

The other way to read it is that Adobe is trying to wring cash out of the last dying gasps of Flash. Adobe has never made all that much from the technology itself and Flash may be on the wane after Apple declined to support it in iOS devices.

The move could make costs unsustainable for some developers, especially considering that they may already pay a 30 percent revenue share to platforms like Facebook or licensing fees to Unity.

“In the cutthroat, thinning-margin social games business, it probably means that no one will be able to afford to use the new features,” said Brian Rue, who recently served as chief technology officer for social game developer 6waves Lolapps, in a blog post. Even now, social game developers are still grappling with the impact of Facebook Credits. Zynga, Kabam, Crowdstar, Funzio — pretty much everyone — is trying to diversify onto mobile. An extra tax puts them in even more of a precarious position.

Rue gave an example. Assume you’re spending $2.50 to acquire a user on Facebook, and your lifetime value (or how much you earn from the player overall) is $3 after the platform’s take, your margin is basically cut by more than half. That leftover revenue has to go to pay for hosting, support and game development.

“That’s huge,” Rue said, adding that Adobe’s move might encourage some Flash developers to migrate faster to HTML5, even though the technology isn’t quite camera-ready yet.

There are some developers that will be able to stomach these extra costs better than others. Kixeye, another Facebook developer, has a smaller audience, but it makes far more revenue per user. That’s because the company targets a hardcore gaming demographic instead of the mass casual audience that Zynga has. (Zynga declined to comment for this story.)

“The 9 percent cut is painful,” Will Harbin, Kixeye’s chief executive, told us. “There’s no other way to put it. However, our mission at Kixeye is to showcase the mind-blowing experiences that browser-based games are capable of delivering.”

Harbin adds, “We can find room in our business model to cover costs like these.” He said Kixeye’s games retain players for five times longer and monetize 20 times better than typical titles on Facebook.

Adobe tells us it researched how to establish a fair pricing structure and says that “not all” developers are expected to use the premium features. The company says it charges 9 percent on gross revenues above $50,000 after payment processing fees, taxes and the platform revenue share. The share covers earnings from app sales, in-app purchases, subscriptions, sponsorships and advertising.

The new pricing plan starts in August and there’s a grace period until then when developers can apply for a license. Adobe AIR apps that access these APIs don’t have licensing fees for now.