As Education 2.0 looms, we’re seeing a rise of remote learning, self-education, smart software, all of which is allowing people to learn and to teach at their own pace — inside the classroom or out. As this becomes more and more true, coupled with the noise that one finds online today in job forums, employers and businesses are looking for more effective ways to identify the right candidate with the right set of skills.

There are a million different approaches. LinkedIn knows it has to change, and is considering a skills section, Identified, BranchOut, and Bullhorn are combining your social graph with (at least in the case of Identified) a reputation score. While a more tried and true measure, employed by sites like Odesk and Elance, ply freelancers with tests that allow them to prove their skills. You may not have heard of it yet, but there is a similar motive at work behind Smarterer.

Beyond an awesome name (and an intimidating logo), Jason first covered the Boston-based startup in June of last year when it raised $1.25 million from True Ventures, Google Ventures, and a flock of angels. The team had founded Smarterer in 2010 with the goal of developing a platform for validating people’s technical and social skills, which it launched officially to the public in October 2011, after its summer financing.

For those unfamiliar, Smarterer wants you to be able to prove how proficient you are at using Salesforce, or Twitter, or Google Apps, all through a series of quizzes. The startup thinks that it can only take a few minutes to prove just how competent you are at using these sites, so users simply head to the site, where they’re served practice tests. If you select Twitter, a sample question might be, “what’s a popular third party Twitter application?” Choose “Twitterer,” and you’d be wrong, pal.

Smarterer’s system is crowdsourced, and edited “Wiki-style,” which Executive Chair Dave Balter says allows their tests to remain flexible — to date, users have created more than 400 tests and have added more than 30,000 questions for skills like Excel, Facebook, PHP, VMWare, etc.

Thus, while Smarterer has been flying under the radar (and providing an awesome complement to the game-ified jobs platform for developers, Gild), its formula has been proving successful this year. In fact, it grew by 1,250 percent in one week. In its blog post on the subject, Smarterer dishes out some interesting advice for startups, especially in relation to strong growth over time vs. immediate, viral growth, the former of which Pinterest has been drawing attention to of late.

After slow growth at first, Smarterer has been hitting some milestones of late, among those is that its community has now answered over 5 million questions, and is now seeing an average of 70,000 questions answered per day. In its Photoshop test, for example, over 12,000 people have answered almost 200,000 questions in an effort to show their Adobe skeelz. 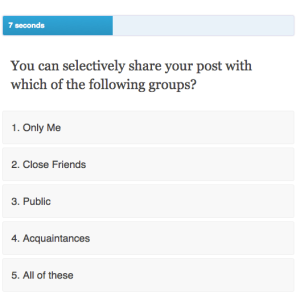 The reason Smarterer has found its so-called “magic button”? It’s a combination of two things: One, in January, it launched a new “Skill Sets” product that helps hiring managers use Smarterer’s tools to validate candidate skills, and the other is that it’s really focused on its algorithm, which doesn’t just monitor user activity and make guesstimations, it’s using a scoring platform based on Glicko (a rating system used to qualify chess masters) that makes the tests get a little better at measuring your skills every time you answer a question.

Every question answered helps the algorithm (and the team) understand its difficulty. This is great for the average user, because, hey, the truth is that not everyone shines on their resumes, and employers can very easily miss great candidates if they become overly focused on a one-page CV to determine talent. Smarterer wants to give those people a way to cut through the BS, and just “show what they know,” with a score served according to Levels of proficiency. Take some tests, and prove that you’re a master of CSS. In less than 60 seconds.

As to revenue models and competition? Well, Smarterer recently struck a partnership with Bullhorn Reach, and it sees sites like Identified and BranchOut as potential partners — not competitors. Right now, Smarterer isn’t charging for its services; both users and recruiters can get tested or use the platform for free. However, as Smarterer is seeing a growing demand to use its platform to validate credentials for professionals, it will likely be rolling out fees for this service in the coming months.

For more, check out Smarterer at home here.