Remember Batch, the photo-sharing app that lets you share iPhone photos on Facebook, Twitter, and via email? Wait, before you roll your eyes – photo-sharing app? Sigh… – let me stick up for Batch: it’s one of the good ones. But today’s update makes Batch even better than before because it addresses one of the major pain points I had in using the app – something that I’ll admit led me to drop it after initial tests – Facebook album support.

Prior to the newly updated version, Batch allowed you to create albums and share them on Facebook, but the photos themselves remained within Batch’s service. When users clicked a shared link, they were taken to Batch, not a Facebook album. But with the update, that has changed. Batch now uploads all of the photos to Facebook for you. And it does so incredibly fast.

I also have to point out that Batch actually lets you name the Facebook albums whatever you want. It doesn’t just lump all the photo uploads into a bucket called “Batch Photos,” or something dumb like that (which I’ve seen other apps do). 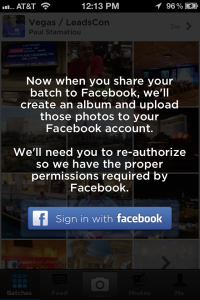 The change may finally allow Batch to live up to Mike Arrington’s earlier suggestion that Batch “may be the perfect mobile photo sharing app.” I’ll admit, it definitely had a lot going for it when it launched last fall, but I (like many of Batch users, apparently), found that I still wanted to share photos directly on Facebook. That is, I wanted the photos to reside on Facebook itself, not within a third-party service.

Batch’s lack of support for that particular option, had even allowed newcomers to come in and try to fill that need. For example, with Popset, a new YC-backed mobile app, one of the app’s key selling points was its support for exporting entire albums to Facebook.

Says Batch CEO Brian Pokorny, the latest update is in line with the company’s orginal direction.

“We always have allowed users to share links to Facebook and Twitter, and heard from our users they’d like to be able to upload the entire album as well. We found this to be a better experience that enables users a more robust utility to share multiple photos from their phone,” he explains.

Batch’s update now fleshes out what was already a well-built service. Working on top of Facebook’s social graph, the app would automatically match you up with your Facebook friends upon first launch, and with its year-end update, it even took pains to make the entire onboarding experience clever and inviting.

The new version has added support for photo tagging, too, including photo tag notifications, but these appear to work in-app only. I tagged folks in my latest batch, shared to Facebook, but those tags didn’t copy over. Surely that’s coming next, though. (And sorry, I’d link, but my photos are private. Just try it yourself.)

The new version of Batch is available now. For our earlier review, check out the Fly or Die episode here.