Australia’s Halfbrick Studios, creators of Fruit Ninja, has just acquired Spain’s Onan Games, developers of the Mandreel technology for porting games across platforms from a single C++ code base. The buy will let Halfbrick efficiently deliver its games to iOS, Android, and Facebook while making other studios pay it to do the same.

By using Mandreel to quickly launch its chart-topping native mobile games on the web and HTML5 as well as collect licensing fees, Halfbrick could boost revenues while keeping the team agile. Like a clan of ninjas…that dine only on fruit.

Efficiency is key for Halfbrick, which only has $3 million in funding from an Australian government grant. Halfbrick’s been around making Game Boy games since 2001, and this acquisition will give it the flexibility to adapt to today’s increasingly fractured gaming. landscape

Onan Games is just a baby by comparison, having opened last year, but it already provides a wide variety of crucial middleware services for game developers. Halfbrick will both use Mandreel for running C/C++/Object-C source code where its not usually supported, and license it to other developers. Past Mandreel clients include Rubicon Development and Glu, which used it to repackage mobile games for the Chrome web store. 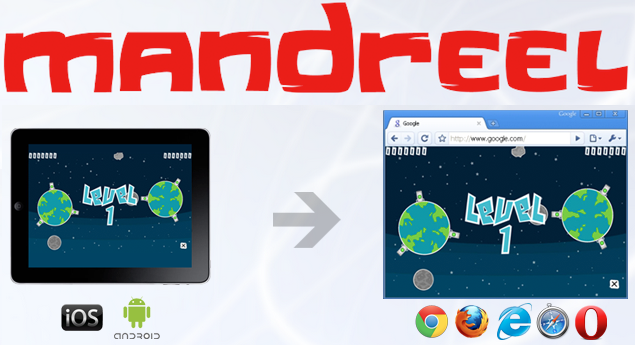 If Halfbrick already had a big vision, now it has the means to execute. It’s first mission will be to bring Fruit Ninja and JetPack Joyride to Facebook and the web so you can chop and soar on bigger screens.