Warsaw-based, three-person startup AppCod.es just released new tools that will appeal to mobile app developers, both of which are intent on helping developers achieve better ASO, or App Store Optimization. ASO is basically a new form of SEO, but instead of boosting search engine rankings, it’s about boosting the ranking of your mobile app in iTunes, the Android Market (I mean Google Play…sigh), or another app store.

Today AppCod.es is rolling out two utilities for ASO in iTunes: one, a keyword prediction tool which aims to guess the keywords used by your app’s competition, and two, a tool that predicts your position in the app store for a given keyword.

“Traditionally, a developer had to submit a new set of keywords for the app into the app store, then he or she had to wait for a week to be approved,” explains AppCod.es co-founder Tomasz Kolinko. “After a day or so, he would see whether his ASO actions worked.”

With the new prediction tool, the goal is to provide similar analysis in seconds, not a week.

The tool is still very new, of course, but Kolinko says that, in tests, results have been promising. To use the service, developers would type in the name of the app and their iTunes keywords, and the results would show the chances of getting into the first page of app search results with that given combination.

In a video (see below), the company demonstrates how this works using an app called “Goal Setting Workshop.” As they try different names and keywords, the percentage chance of getting into the top results updates in real-time. 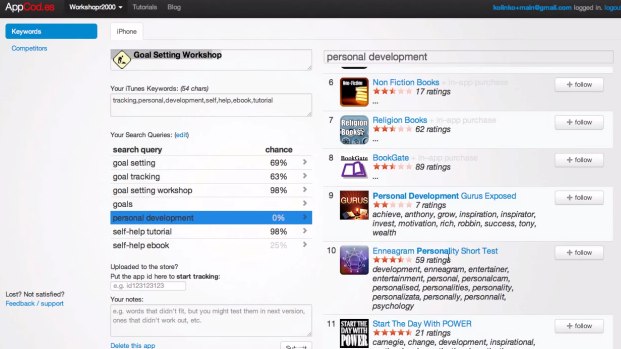 The tool isn’t built based on public data provided by Apple, as such a thing is not available. Instead, it’s based on AppCod.es’ own observations and analysis of app store queries and behavior. The company developed algorithms that attempt to reverse engineer Apple’s own weighting mechanism, the generalities of which are already known.

The devil is in the details, of course. To determine how it works, the team analyzed data related to their own apps, their knowledge of keywords, and competitors’ keywords and then tried to guess at the exact weighting function.

“We didn’t get it 100% right, because we don’t have all the data Apple has, but it’s more or less right,” Kolinko says of the utility.

Even if it’s a hit-or-miss offering (which requires more testing from a broad set of developers to be determined), it’s an improvement on the ASO techniques many developers use today – which is to say, none.

Also new today is a tool that functions as a keyword prediction utility. This one aims to help developers figure out the keywords their competitors may be using.

For example, the tool could tell you that something like Instagram uses keywords like “camera, effects, filters, free, photo, share, vintage, and hipster,” among others. (Also, LOL at “hipster.”). Knowing how competitors position themselves in the App Store is a good first step at knowing which keywords you should choose, or those to avoid.

Kolinko says the company has a database with 450,000 iOS apps and 150,000 keywords, and it’s easy to check if they are the right ones. “For example, according to our database, for the app ‘Angry Birds,’ one of the keywords is ‘slingshot.’ If you enter the U.S. App Store, and type in the search ‘Angry Birds slingshot’, you’ll find the app Angry Birds,” he explains. “This can only happen when Angry Birds actually has ‘slingshot’ their list.”

However, he notes that Apple also uses approximate matching, so in some cases, the AppCod.es guess is a close match of the word. That means an app using “gratis,” for instance, may be surfaced by “gratii,” “gratuit,” “gratins,” and other misspellings.

AppCod.es admits that they’re a little bit behind in terms of the quality of their website’s design, especially when compared with the more professional offerings from MobileDevHQ (via AppStoreHQ), for example. We covered MobileDevHQ’s ASO tools last month. (And yeah, AppCod.es hijacked the comments section there with links to their own offering. But that’s OK this time – this market needs more attention.)

For now, tools like this are relatively easy to build, as there are only a handful of parameters used to rank app results, unlike Google and its thousands of signals used to rank webpages. Over time, though, and especially after the Chomp team gets involved in search improvements, ASO will become far more complex.

The AppCod.es toolset is a paid service ($15/month) and works for the U.S. iTunes App Store only. However, TechCrunch readers can use the code TC1 to get their first month for just a dollar. And the first 50 accounts to sign up with TCFREE will get the service for free.