Editor’s note: Ryan Sutton-Gee is the co-founder and CEO of Y Combinator-backed PlanGrid, which offers builders the ability to store, view, and manage blueprints on an iPad. Follow him on Twitter @rsuttong.

The basic process of any construction project goes like this: A person with a lot of money (called The Owner) decides that, for whatever reason, they want a building and so they go hire an architect. This architect in turn hires a bunch of engineers and all of them start furiously designing the building until The Owner seems happy enough to move forward. Once that happens, the design is printed on piles and piles of paper and then handed to the construction team who starts the actual construction.

This is, of course, a gross oversimplification, but the interesting thing to note is that this entire exchange of information is digital — up until the point where the actual construction takes place. Because all the design information is digital, tons and tons of amazing software have been created to make that part of the process better and more efficient. In fact, architects and engineers have gotten so good at being efficient, that all together they now typically only make up 8% of the total cost of a building. Meanwhile, the poor guys in the field have, by many estimates, gotten worse and worse. 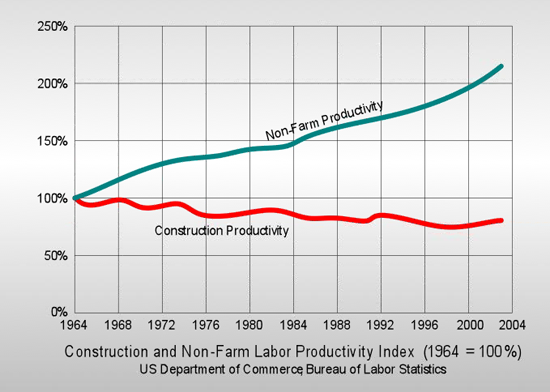 Enter the iPad and other tablets.

Tablet computers will be the things that change all of this. Although the things they do better than laptops — smaller, more durable, longer battery life, doesn’t need a table to be useable — seem more evolutionary rather than revolutionary, in the context of construction field workers, it’s the difference between using a tool that almost works and a tool that can actually get the job done. It’s basically the first computer that is truly usable in the field and as a result they are already starting to be rapidly adopted by construction companies. The third-generation iPad and the improving Android tablets are only going to accelerate things, and so over the next few years we’ll undoubtedly start to see software that will transform construction as much as AutoCAD transformed architecture and engineering.

Here’s just a short list of some things that will transformed in the next few years as the iPad delivers computing to the construction site:

And that’s just the beginning. There are already multiple construction focused apps coming on to the market, such as AutoDesk’s AutoCAD WS, Bentley’s Navigator, and my company PlanGrid, but as time goes on we will undoubtedly see more and more useful tools come to market.