Eclectic local recommendation service Sōsh is launching on the iPhone, giving people a way to find cool things to do in San Francisco even when they’re away from a computer.

Sōsh founder Rishi Mandal holds that users have moved from the “willing to spend time to save money” mentality of the deep
recession (leading to the popularity of startups like Groupon and Gilt) to the “willing to spend money to save time” mentality of tech
bubble 2.0 (leading to the popularity of startups like TaskRabbit and Uber). “People are willing to invest either time or money being interesting,” he says, “[And] When you find something on Sōsh, you know it’ll be a worthwhile and meaningful experience.” 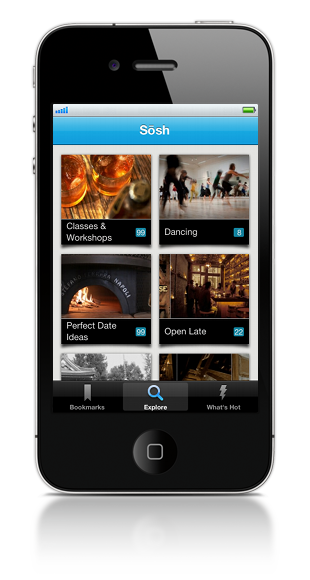 While Sōsh is in the same local recommendations space as startups like Yelp, Oink and Daily Secret, the startup aims for a more curated and personalized experience; Its algorithm crawls thousands of sources like Facebook, Twitter feeds and blogs and Sōsh employs staff to help curate the information.

Mandal views the app’s closest competitors as publishers and word of mouth. He uses Bourbon and Branch’s secret speakeasy night “Wilson and Wilson” as a way the service differentiates itself from a simple list of venues, “The only other way you hear about this is word of mouth,” he says.

But “word of mouth” is hard to quantify, and Mandal’s aim with Sōsh is to
create a simple and centralized feed of all the channels that people receive cool local recommendations through.

Users of Sōsh via mobile can view already existing events that they’ve bookmarked on Sōsh via the “Bookmarks” button, using the explore button to browse through categories like “Perfect Date Ideas” and “Under $30.”

The “What’s Hot” button shows you what events are popular among the Sōsh community separated by category and week. Clicking the Direction icon on the top right of the app will give you a list of event options nearby.

Sōsh also lets you universally see which friends of yours have signed up for events, as well as RSVP and buy tickets in app, convenient if you want something to do and are out-of-pocket — a scenario that happens pretty often, right?

“We’re thrilled about the iPhone app because it amplifies the power of Sōsh, since so many people are making these decisions on the go,” Mandal explains. While the app is only available in San Francisco currently, Mandal plans on expanding to other cities and possibly other platforms soon.

You can find Sōsh in the App Store here.