A German court ruling against Facebook this morning is likely moot because the social network had already made changes to address the court’s mandates.

See, back in 2010 a German consumer organization complained Facebook’s Friend Finder inviter feature didn’t adequately inform users their imported contacts would be used to send invites, according to Friending Facebook Blog. But Facebook has since made numerous changes to Friend Finder, including adding a disclaimer, providing an improved contacts manager, and adding unsubscribe options to email invites. It probably won’t have to make any significant changes in response to this ruling.

According to the complaining Verbraucherzentrale Bundesver consumer group (translated):

“The court ruled that the user would have to be clearly informed that their entire address book is imported by Facebook’s Friend Finder and is used to send invitations to friends. While the Facebook application has been modified slightly, in the opinion of the vzbv not be sufficient. ‘The fact that Facebook imports the entire address book is still not readily apparent,” writes vzbv Board Gerd Billen.'”

Facebook won’t receive the actual court papers including the rationale for the ruling until a few days from now. At that point it will learn if the ruling was based entirely on the 2010 version of Friend Finder, or if new versions were considered. A spokesman tells me, though,

“We will take a close look into the details of today’s court decision as soon as they are available and then decide on the next steps. Facebook Ireland Ltd, which provides our service to people in Germany, is committed to adhering to European data protection principles as demonstrated by the recent report of the Office of the Irish Data Protection Commissioner.”

Facebook has informed me that contacts imported by Friend Finder have never been automatically invited to join the service, and that users have always had to actively click an “invite” button. However, if invitees didn’t respond, it would automatically send up to two reminders. 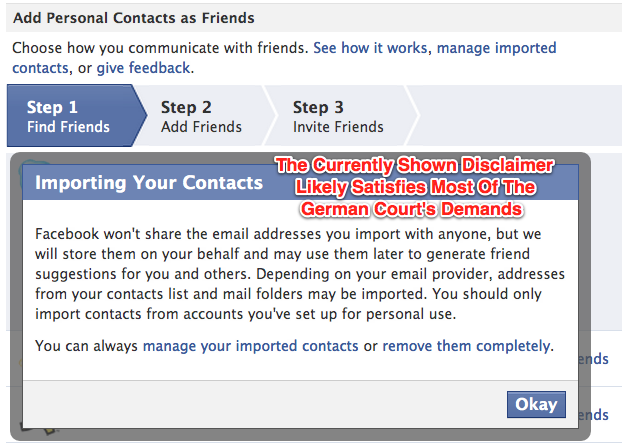 To make Friend Finder more privacy friendly since 2010, Facebook has added an unsubscribe button to its email invites and reminders. A contact manager lets users delete existing contacts or prevent reminders from being sent. Most importantly, Facebook now shows a “See How It Works” link in Friend Finder that reveals the following disclaimer that sounds pretty much exactly like what the German court is requesting that Facebook add:

“Facebook won’t share the email addresses you import with anyone, but we will store them on your behalf and may use them later to generate friend suggestions for you and others. Depending on your email provider, addresses from your contacts list and mail folders may be imported. You should only import contacts from accounts you’ve set up for personal use.”

Over the past six months, deep privacy audits by the U.S. Federal Trade Commission and the Office of the Irish Data Protection Commissioner haven’t found problems with how the new version of Friend Finder informs users how contact are used. Facebook has agreed to seek safer alternatives to transmitting data over plain text, and tell to users that deactivating contact sync doesn’t remove previously synced data.

Neither of these commissions had complaints about how the core functionality of Friend Finder works or is explained, so the Germans would have to be feeling pretty feisty to conclude that more changes were necessary. At most, the words “entire address book” might need to be added to the current disclaimer or reminders might not be able to be sent in Germany. As the social network is still trying to sign up users in Germany where it has a lower than average penetration rate of roughly 27 percent, these changes could have negative impact on Facebook’s business if required, but it would be a small one.

Really today’s ruling shows the inability for the world’s courts to keep up with the pace of high tech and product innovation. Had the complaint been heard in 2010, it could have spurred Facebook to make changes sooner. Instead today’s hearing was likely a waste of German taxpayer’s money.