Disruptive mobile and online payments startup Jumio has raised $25.5 million in Series B funding led by Andreessen Horowitz. The firm’s General Partner Scott Weiss has joined Jumio’s board of directors. Jumio’s earlier investors include Facebook co-founder Eduardo Saverin Peng T. Ong, partner at GSR Ventures and founder of Match.com and Vivek Ranadivé, founder of TIBCO. Founded by Daniel Mattes in 2010, Jumio has raised $32 million to date. We previously reported the most recent raise, which was disclosed in an SEC filing, but the new investors were unknown.

Mattes, who sold his latest company, Jajah, to Telefonica for $207 million, founded Jumio because he felt that existing online payments solutions both presented a security risk and caused churn, as most people didn’t want to input their credit card and payments details by hand for each transaction made on a phone or online.

Jumio’s first product Netswipe, debuted last year in Europe as a technology that allows e-commerce site owners and Internet retailers to process online and mobile payments by having customers ‘swipe’ their credit cards using virtually any webcam. Basically, the webcam uses Jumio’s patent-pending technology to scan and read the card so that the payments can be made.

To complete a transaction, consumers briefly hold their credit card in front of their webcam. Through secure videostreaming, the credit card details are recognized and verified: no snapshot image is taken, no data is stored on the computer used for the payment, making the technology extremely secure, explains Mattes. Credit card info is streamed to Jumio’s servers.

The benefit to Netswipe is that it minimizes the time between a customer’s decision to purchase something online and making a transaction, cuts down on the friction of entering credit card information and reducing fraud. The technology also comes with a complementary mobile solution, which works similarly to the web platform. You simply use the phone’s camera to take a short video of the credit card, and the payments data is captured. As Mattes tells us, the main IP for Jumio is centered around computer vision technology that makes the process fast and secure.

In terms of how Jumio makes money, the startup takes a percentage of each transaction, which depends on size of merchants. This falls anywhere between 0.8 and 3.5 percent per transaction, and there is no per transaction fee. For distribution, Jumio will partner directly with large-scale retailers to implement the technology in the payments and checkout process as well as with payments service providers and processors to reach small and medium-sized online businesses. 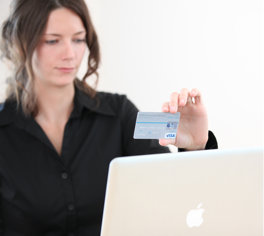 The company is also debuting Netverify, the company’s newest product for online merchants. Built with the same patent-pending technology as Netswipe, Netverify turns any webcam into a virtualID reader. Netverify allows merchants to confirm a customer’s identity in real-time and continue an in-process transaction without interruption, eliminating the need for consumers to scan and fax copies of their ID. Instead, they simply hold their ID up to a webcam, Netverify scans it and the merchant gets an instant verification. Mattes says that Netverify can be used as a complement to Netswipe or as a single solution. We’re told already a number of banks are excited about using the technology, both the online, and on mobile.

As Weiss explains to us, Andreessen Horowitz made this bet on Jumio partly because Mattes is a successful serial entrepreneur but also because the startup’s technology solves a real problem with online merchants accepting credit cards, making the user experience much easier and solving fraud problems. “This is already a tempest in a tea pot and starting to explode,” Weiss says of Jumio’s technology.

The company started off with a European focus last year on gaming, retail and travel and now is on track for a $100 million revenue run rate in 2012. The new cash infusion will go to hiring as well as expanding merchant and network partnerships through the U.S. and Asia in retail, travel, gaming and digital goods.

Weiss seems optimistic that Jumio can enter these markets and change consumer behavior, saying “I don’t stay up at night worrying about how Jumio is going to do…there’s so much to like about the business and it has the potential to be the primary way people take credit cards online.”

Mattes and Jumio are essentially trying to replicate the ease and security of swiping a credit card through a payment terminal online through this video streaming technology. It’s an ambitious goal, especially considering that you have to change the behavior of consumers from inputting credit card info via typing into fields into using their webcams. But clearly the young company is seeing traction in Europe and is making an impressive amount of money along the way.