TestFlight could have been a safe little business, but co-founder Ben Satterfield is a true entrepreneur, and his dreams are not so small. Before today, only the most successful mobile app developers could afford sophisticated real-time usage and revenue data tracking. Costs prevented indie developers from getting the data they needed to build great apps and games. By being acquired by in-app ad management platform Burstly (scooped by MG Siegler for PandoDaily), Satterfield’s team gained the resources necessary to launch TestFlight Live, democratize this data, and get better apps built for everyone.

Satterfield tells me “This is us believing in the bigger vision. [The original TestFlight] is a great product on its own, and we could have charged and gone scrappy with it month to month, but we want to wake up every day and go after something big.”

That’s why TestFlight didn’t slap a subscription fee on its free iOS app testing platform, or port the same features to Android. It saw a big gap in measurement tools for mobile devs, realized the platform owners Apple and Google couldn’t or wouldn’t solve the problem, and it seized the opportunity. Developers can now leave the pre-launch TestFlight code in their apps to gain access to TestFlight Live’s engagement and monetization data from real users.

In social games on the web, Zynga used its funding and early success to build powerful data analysis and game optimization tools that helped it crush smaller competitors going on hunches. This arguably reduced innovation across the space. TestFlight could protect the burgeoning mobile app industry from the same fate.

With TestFlight Live’s dashboard, even tiny studios can watch install rates, and what levels users are getting stuck on, but also revenue rates and which ads are driving clicks — all from a single screen. Ties to Burstly’s multi-network ad management platform will make it so developers aren’t at the mercy of a single ad network. Burstly’s CEO Evan Rifkin tells me, “Once they understand lifetime value and average revenue per user, they’ll know what they want to build, how much to spend on marketing, how many developers to hire, and it will allow the app economy to flourish.” 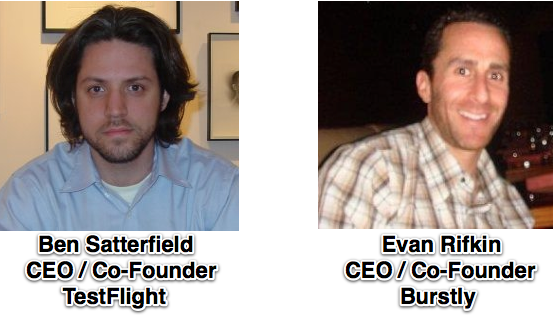 When asked if the TestFlight team was worried that Apple could steamroll them with its own app testing and measurement platform, Satterfield explained, “We all love Apple obviously, but what they do is they champion the consumer.”  Rifkin chimed in, “It’s in our minds but not something we’re really worried about. Developers are important to them, but consumers are #1. We built this because we wanted it, and it’s our only focus.”

Rifkin also noted that Apple would never build something that also supported Android. Now,TestFlight doesn’t support Android yet either, but Satterfield says “it’s something we’re consistently thinking about. There’s specific pain points in developing for that platform, and we’d want to make [an Android version] specific to those needs.”

A higher priority, though, was getting TestFlight Live out the door and improving the original TestFlight’s UI. Developers can actually get a sneak preview of the next iteration of TestFlight right now by going into their account and enabling ‘v2’ in the “Area 51” section. Satterfield calls it a “beta beta”, and asks devs to turn v2 off once they’ve had a look, as all the kinks aren’t out yet. 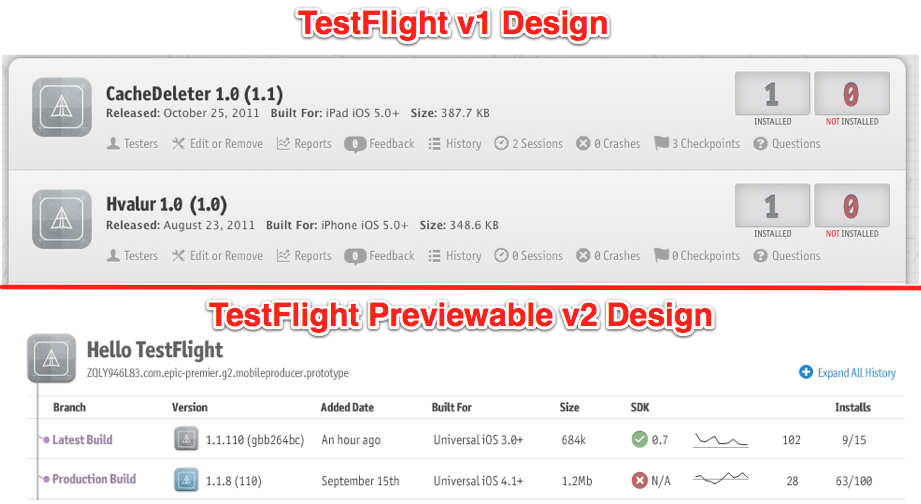 If you could hear how passionate Satterfield and Rifkin are about empowering developers, you’d stop asking “Why not go it alone?” Rifkin rallies, “It’s such a bold, difficult mission, even as a combined company. I don’t think there’s a chance in hell Burstly or TestFlight could have done it by themselves. The path we were on was cool, but that’s not why we’re working our asses off and getting very little sleep.”

There’s something grander at stake than mobile ads or beta testing. It’s about helping creators create. “We can get the data to every developer, and raise up the entire app ecosystem. That’s the religion that brings two companies together when they’re doing well on their own.”