DealBoard, a recently launched iPhone app from Seattle and London-based nFluence Media, has just emerged as a new player in the crowded “daily deals” space. But this app isn’t yet another Groupon clone, it’s a daily deal aggregator. However, what makes dealBoard unique – and why the company has $3 million in funding – is how the app goes about aggregating those deals for you. Instead of just rounding up a list of all the deals in the area, dealBoard personalizes the experience based on your interests.

With dealBoard, you don’t have to create an account, hand over your email address, provide your phone number, or give up any other personal information to the company. Instead, the app helps you to set up an anonymous profile using nFluence Media’s proprietary “brand sorter” technology. 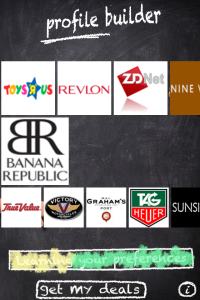 In practice, this consists of a visual interface where brands’ logos are presented to you as thumbnails which you swipe up or down to indicate your interest. The company claims set up takes under a minute, and while claims like this are usually overly boastful, this one was dead-on. I think it took me about 30 seconds.

Afterwards, the app builds up a list of deal recommendations for you, based on those interests. And as you continue to use the product, your continued feedback helps dealBoard better learn your preferences along the way.

In the app, the deals themselves are presented as cards which you flip through, with the deal title, price and photo as the only items shown on the front of each card. To see additional details, you just tap the card to flip it over. Here, you can also tap “get,” “save,” or “share” buttons.

However, when you go to purchase the deal, you’ll need an account at the deal provider in question, whether that’s Groupon, Gilt Groupe, Living Social, Dealfind, or another vendor. So, in this respect, dealFind isn’t introducing a completely anonymous shopping experience – it’s about anonymous targeting only. Still, using the app allows you to shut off the deluge of daily deal emails, many of which you have no interest in.

For what it’s worth, from initial tests on my end, dealFind’s system isn’t perfect. For example, after indicating interest in a number of kids’ brands, and a bit of interest in everyday deals like car detailing, clothes, makeup and magazine savings, the app proceeded to show me spa deal after facial after massage after microdermabrasion after yet another spa deal.

I mean, look, deal-targeting gurus, while it’s true that busy, working moms are probably those most in need of the R&R provided by a spa experience, they’re also the least likely to treat themselves to something like that. We’re more likely to spend the little time we have with our kids, and the little money we have on them. In fact, if I had to rank my deal preferences, spa deals would be at the rock bottom of the list. Cannot. stand. them.

Maybe that’s just me but the experience prompted me to look for the “X” button to kill off the unwanted deals. Unfortunately, it was nowhere to be found. You can save/favorite deals, but you can’t hate on them. Bummer.

nFluence Media announced last month that it had raised $3 million in funding from Voyager Capital with contributions from 17 angels in the Alliance of Angels. And while this first example of the targeting tech may still need a little work, the company’s expectation is to eventually port its ranking algorithms beyond the daily deal market to help improve recommendations for TVs, shopping malls, and more.

DealBoard is available now on the iPhone, with Android and Windows Phone apps still to come.