With the social travel space taking off right now, and competition increasing, it really behooves the bigger players in the space not to do too much smelling of the roses. Social travel planning startup Gogobot would be a good example. The site found some early adoption and buzz, after winning a Crunchie for Best Design and was named one of the best 50 websites of 2011 by Time.

Initially, Gogobot was designed to be a place people could go to share reviews on their favorite destinations — like Yelp for travel. But it quickly began adding features, like the requisite inclusion of Facebook and Twitter signup/integration, game mechanics and rewards (like badges and leaderboards), and launched a good-looking mobile version in iOS app form. These moves beefed up the service significantly, and led to the startup’s $15 million Series A raise in November.

Gogobot then went on to leverage its user-generated database of travel photos in a smart partnership with Flipboard that would turn its photos into sleek, geo-tagged postcards, like a travel scrapbook. Yet, since launching its iPhone app in October, Gogobot has pretty much left its sole mobile app alone, aside from a number of small releases mainly focused on speed and performance.

That approach is changing today, though, as Gogobot has launched its first major upgrade to its iPhone app, which looks to add to the app’s utility as a social travel planner. Gogobot CEO Travis Katz tells us that, initially the team figured that users wanted to do most of their travel planning on their desktops, and use mobile to navigate their trips and share their experiences. But user feedback showed the opposite — that people want to plan their trip, explore, and share while on the go, too.

So the new mobile Gogobot now allows users to plan their entire trips to one of more than 60,000 travel destinations, based on recommendations from friends and those with similar interests. Users can browse reviews and photos of hotels, restaurants, and attractions (which Gogobot sorts based on their popularity within your personal network), picking and choosing from the best options to create their own travel plan. They then get instant access to maps and directions, phone numbers, hours of operation, making reservations at restaurants and booking hotels rooms right from the app.

Once they get back home, Gogobot users can surf through the photos of friends and family who are still out on the go, with Gogobot collecting those images into postcards. According to Katz, this has become one of Gogobot’s most popular features, and has also received an upgrade, now offering users access to two postcard styles which can be shared via Facebook, Twitter, SMS, or email. 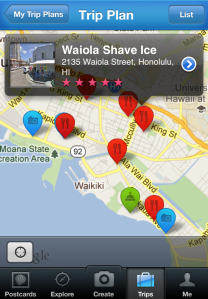 Gogobot users can still add places and write reviews to their Gogobot passport while on the go, but browsing the best things to do, and adding those places they like to their trip plan are great new features while you’re maneuvering about on your vacation. It’s also pretty huge that Gogobot sorts the top places in any city, based on your own personal network, so if your friends have been to a specific hotel or city, Gogobot will show those friendsourced recommendations first. If you don’t, it sorts them based on popularity, and always surfaces the reviews that have personal relevance within your network first. For example, this is the passport Gogobot created for Mista Katz, without doing any work.

And just for a sense of how far the startup has come? TripAdvisor, by all accounts the largest player in the space, (which also went public in December and grew revenues to $137 million in February), comes up short of Gogobot in monthly active users in terms of TripAdvisor’s canvas app, according to AppData. Although it has a long way to go in terms of its main app, even if AppData just measures Facebook data, only a portion of Gogobot’s user base.

It’s a solid update from Gogobot, and worth checking out.

You can find the updated app in the App Store here.