Enterprise social network and communications platform Yammer has finally closed that big round we and PandoDaily heard about earlier this year. The company has raised $85 million in new funding, bringing the total investment in Yammer to a whopping $142 million. DFJ growth and Social+Capital Partnership (who led Yammer’s last round) led this round. Other investors joining the round include Meritech, Khosla Ventures, Capricorn (the investment arm of Jeff Skoll), as well as existing investor Charles River Ventures, Founders Fund, USVP, Emergence Capital Partners. Founder and CEO David Sacks tells us that the company had over $30 million of insider investment in the round. We’ve heard the company’s valuation for the round was around $500-600 million (Yammer wouldn’t comment on this)

Sacks says a number of angel investors also participated in the massive round including Sacks’ old PayPal colleague Max Levchin, as well as CrunchFund, Bill Lee, Ronnie Lott, and a few others. Randy Glein from DFJ Growth will take a board observer seat.

I had a chance to speak with Sacks this past week about the company’s evolution as an enterprise player, future product strategies as well as what Yammer plans to do with all this new cash. Since Yammer’s launch in 2008, the company has evolved significantly from a single product into a platform. As you may know, Yammer launched as the “Twitter for businesses” at TechCrunch 50 in 2008. Quickly, businesses and organizations (including TechCrunch) realized the value of an internal messaging tool, and adoption began to rise. The company now has 4 million users, including employees at more than 85 percent of the Fortune 500. In 2011, Yammer tripled sales, employee headcount, and paid seats.

As more large enterprises adopted the messaging product, Yammer added more secure features such as the ability for companies to install it inside their corporate firewalls. The company also began making internal conversations more social and readable, with ‘Likes’, threaded conversations, and mobile connectivity.

In 2010, the startup has expanded to become a more comprehensive platform for social networking within the enterprise. This included adding a number of applications to its platform that increased its functionality beyond just a communications platform, including polls, chat, events, links, topics, Q&A, ideas and more. An activity feed aggregates stories about co-worker actions within all of their enterprise apps (both on and off Yammer) and allows users to follow content.

From the product standpoint, this started as Yammer Connect launched to integrate log-ins into third-party applications and the platform also now supports badges and in-line videos. Yammer then debuted integrations with Salesforce, Box and others to bring data from these enterprise products into Yammer’s social collaboration feed via what’s called a ‘Ticker.’ So users can see actions taking place in other applications (including most recently SAP) outside of Yammer within the network.

As Sacks explained at the time, the ability to create a go-to corporate social network is a Facebook sized opportunity. And Sacks realized that there was more to enterprise social networking than just @messages and follows. He has ambitions of building an easy to use social networking product that can be integrated into company communications platforms, fitting into the whole trend of the ‘consumerization of the enterprise.’ 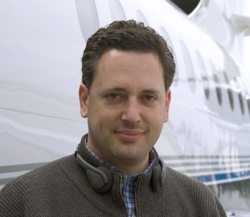 Sacks says now that if Salesforce represents the entry of business applications in the cloud, Yammer should represent the ‘consumerization of the enterprise.’ He says that as workers are becoming an integral part of the conversation taking place around the usability of enterprise software (as opposed to just IT admins and sales and operations VPs), Yammer is increasing in usage.

The second part of the consumerization of the enterprise involves creating an open platform similar to the way Facebook’s open graph has taken off. “We’re taking what Facebook did with the open graph and applying this to the enterprise world. The world we are envisioning is that all enterprise software will share activity streams into Yammer,” he explained to us. The ticker is the first step of this, but we’re going to see additional deeper integrations with third-party applications, says Sacks.

Part of enabling collaboration across people, actions and content is going to be mining big data. Sacks says that data is a big part of the 2012 road map, and making “data social across the enterprise will be a purpose of the open platform.”

As Yammer’s VP of Product Jim Patterson explains to me separately, “We’re now working on making Yammer not just a place where you talk about work, but also get work done.” He echoes Sacks’ thoughts on Yammer as a platform, similar to the way Facebook has structured its open graph. “We want to do exactly what Facebook is doing on the Internet but for the company intranet,” he says.

Chamath Palihapitiya, founder and managing partner, Social+Capital Partnership said in a release of the new investment: “When we first invested in Yammer, it was because the company reminded us so much of the early days at Facebook. David and his team have built a truly unique business – an enterprise company with fundamental product value that grows like a consumer company through virality and product engagement.”

In terms of future products, Yammer will introduce universal search in a month, so that any object sent through Yammer (including through the ticker or the communications stream), will be able to be surfaced in a search. One area where Yammer has been particularly weak is mobile. Sacks actually admits that there is a lot of improvement that needs to take place on Yammer’s mobile front, as well as on its clients. The site will eventually launch native apps this year, and make sure that Android and iOS are “first class experiences.”

As for this massive round of funding, Sacks says that the new cash will be used toward marketing and brand awareness. Sacks says the company is beginning a major ad campaign tomorrow, starting with a full spread in the Wall Street Journal. “We want to draw attention to enterprise social networking as an important new category of enterprise software.”

Glein, managing director, DFJ Growth, said of the investment and company: “In the past few years, Yammer has assembled a world-class team and built a pioneering social networking product for enterprises. Yammer’s customers absolutely love the product and its benefits for their organizations, turning them into brand advocates and helping fuel Yammer’s explosive growth. This financing will enable Yammer to extend its market leadership and seize the massive opportunity in front of them.”

Another area where Yammer will be focusing its efforts is on international expansion, and creating additional sales outposts both outside and in the U.S. Yammer will be doubling down on staff this year, after tripling employee head count in 2011. The company currently has 250 employees.

And in case you were wondering about a possible IPO, Sacks, who led PayPal through an IPO as the payments company’s COO, is in no rush to hit the public markets. “There is definite wisdom in waiting as long as possible on the IPO,” he says. He’s planning to adopt the Facebook strategy of holding off on entering the public markets until the time is right both in the economy and for the company.

Sacks tells us that the company currently has $100 million in cash in the bank and will possibly be interested in acquiring technologies and companies this year. “This is around an IPO sized financing round without all the baggage that comes with an IPO,” Sacks explains. “We want to make sure we are in a position to win the market.”

The enterprise social networking space is a battle; however, and no matter how you look at it, it’s a competitive space. Jive, Salesforce, as well as newer communications and workflow platforms like Asana have all thrown their hats into the ring, and the market has huge potential. In fact, spending on enterprise social networking is expected to reach $1 billion this year alone. Clearly, Yammer is set to take a piece of this growing pie. 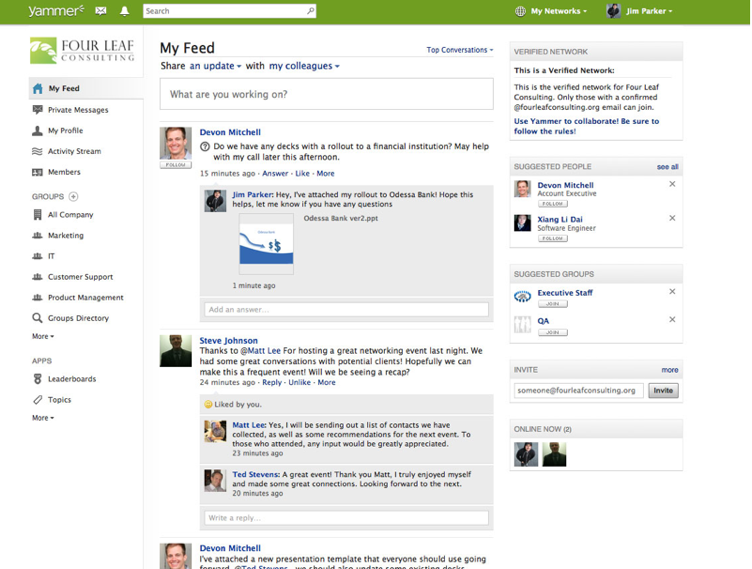