You may not know this, but Turkey has a fever. And the only prescription is more games. That’s right. Sifting through some of Pando Networks’ recent numbers on international gaming, we found that Turkey owns an increasing share of the global downloads of free-to-play games. Over the last year, the number of gamers in Turkey downloading free games climbed to over 5 million, a 534 percent increase since 2010 — and more than 14 percent of the country’s total population.

Not only that, but Turkey has a growing appetite for social games, which is precisely the reason Peak Games has parked its headquarters in Istanbul. In case you’re not familiar, Peak Games is a social gaming company that produces titles specifically for emerging markets — specifically in Turkey, the Middle East, North Africa, and South America.

In conversation with the gaming company’s Chief of Strategy, Rina Onur, she made it abundantly clear that the company is aware of the huge lead Zynga has built in social games in the U.S. (its titles have over 55 million daily active users, compared with Microsoft in second at 22 million), and that there is stiff competition among Zynga, EA, wooga, and others for the Western markets. But Turkey, the Middle East, and North Africa (MENA) have increasingly connected populations, their young people are coming online in droves, and they love to play games.

So, while Zynga, EA, and wooga focus their efforts in Europe and North America, largely lacking a presence in MENA, Peak Games has been busy acquiring studios or creating their own games like Okey, Umaykut Online, Akvaryum, Erlikhan Günlük Falınız, which Onur says now have over 7 million daily active users. (Although AppData puts that closer to 4 million.) These games are all built around popular Turkish and Arabic card/board games that are native to the region, so the titles are tailored towards their specific local markets, in their native tongue.

Peak Games’ MENA focus has caught the attention of top tier VCs in Europe, as the company closed a $11.5 million series B funding round in September from Earlybird Venture Capital and Hummingbird Ventures, among others, bringing the startup’s total investment to just under $20 million. At the time, Turkey was the fourth largest Facebook market, with some 30 million+ using the social network, and those numbers continue to grow across the Middle East and North Africa.

With this high rate of adoption, the startup has been eager to acquire studios with strong development talent and established titles and help bring those to the Facebook platform, make them more social, and expose them to its multi-million-strong existing user base. Last summer, it acquired two hardcore strategy game studios, Umaykut and Erlikhan, (both of which are Turkish) in an effort to continue bringing these emerging markets to social gaming. 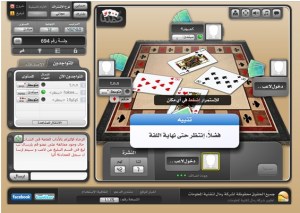 And today, Peak Games is announcing the acquisition of Saudi Arabian social games giant, Kammelna Games, as it looks to further expand its reach into underserved markets with localized, culturally-specific games. The startup already has a popular Arabic-language title with Happy Farm (at some 2.2 million daily active users), which it will now complement with Kammelna’s “Baloot,” a popular Saudi trick card game.

The Chief of Strategy says that more than two-thirds of Internet users in Saudi Arabia play games online, and the country has one of the highest average revenue per user (ARPU) rates in social gaming. Capitalizing on what they see as a massive regional opportunity (that is only going to get bigger), Peak will now set about launching Baloot across platforms, including Facebook and mobile, as well as using Kammelna to develop (and launch) more Arabic card, board, and table-top games.

Peak Games now claims to have over 20 million active players worldwide, with 150 employees (40 of whom are in MENA), and you can be sure that this is not even close to the end of the startup’s near-term M&A strategy, as we hear that Peak is in the process of acquiring yet another studio. It’s not clear which studio yet (and the company would not divulge the price of its Kammelna acquisition), but you can be sure that the acquisition will be another stepping stone in its mission for MENA dominance. More to come as we learn more.