Canonical’s Ubuntu TV, unveiled earlier this year, was the first in a series of announcements about “Ubuntu on devices”. The next device in Canonical’s multi-screen strategy for world domination is being unveiled next week at Mobile World Congress 2012, and it’s an Android-powered smartphone. It’s not entirely what you might think, though.

This is not an Ubuntu app running atop Android. Nor is it an all-Ubuntu device running an Android emulator. Rather, Ubuntu for Android it the full Ubuntu desktop running side-by-side with Android on a shared kernel that provides context appropriate access to all your content. When out and about, the phone operates as any other Android-powered phone; but when you slip the device into a dock connected to a monitor, keyboard and mouse you get the familiar Ubuntu desktop experience.

I admit that I think this is pretty novel. It’s not an Asus Transformer trying to play both sides of the smartphone / laptop experience with a single OS. Instead, it’s something completely new that’s trying to leverage the right interface and experience for the right context. It’s a phone in most senses, but only activates the Ubuntu desktop when connected to peripherals that benefit from them.

What’s this good for? I asked Jane Silber, Canonical’s CEO, that question. The most immediate use case is enterprise users: people who carry a smartphone and a laptop. Ubuntu for Android would allow many mobile professionals to reduce to a single device. Average users would benefit from this convergence, too. According to Silber this allows “the right experience on the right form factor.” 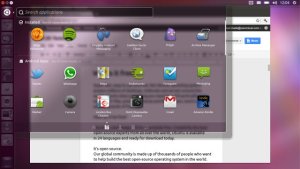 What are the benefits of this Android/Ubuntu hybrid? Data consolidation, for one. You don’t need to duplicate your address book, or even synchronize it: whether you’re looking for a number to call from the Android phone app, or looking for an email from the Ubuntu email app, both programs are interrogating the same single address book. The same holds true for documents, media, and any other content stored on the device.

Another neat trick: if you connect your Ubuntu for Android device to a television via HDMI you don’t get the Ubuntu desktop: you get the Ubuntu TV interface. You can browse media on your phone or access online content as you would with any Ubuntu TV appliance.

Ultimately, says Silber, this hybrid approach reduces the mental “context shifts” required by using multiple independent devices. When your Ubuntu for Android device is docked and you’re composing emails, you can still send and receive texts and phone calls — and, indeed, access and launch all the Android apps on your phone — meaning that you don’t need to move away from your laptop to pick up and use your phone. You simply mouse over to the incoming call indicator and select the action you desire: take the call, hang up, whatever. Efficiency, for the win! 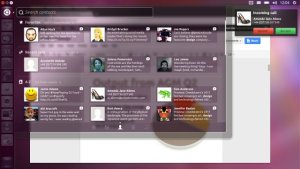 When I asked Silber how long it would be until they kick Android to the curb and release an all-Ubuntu phone, she simply said “We’re not going to be announcing that at MWC 2012.”

As with the Ubuntu TV, Canonical won’t be unveiling a completed product ready for purchase next week. They’re showcasing the technology they’ve developed and are looking for hardware partners.