If you’re an AT&T customer coming off of a contract and looking to snap up a new phone, you should probably get on that right now. According to an AT&T memo obtained by BGR, AT&T will be raising their device upgrade fee from $18 to $36 as of February 12, which means you’ve got until Sunday to swap phones before your first post-upgrade bill gets even bigger.

The memo states that the fee hike is needed because “the overall costs associated with upgrading to a new device have increased.”

In AT&T’s defense, it’s a fee that’s most people will only have to deal with once every two years or so, but the additional cost is unlikely to please customers. They’re also not the only big carrier that has had to hike up their fees — Sprint made the transition to a $36 upgrade fee this past September. But still, AT&T doubling their upgrade fee is a puzzling move when their biggest rival (Verizon) still doesn’t charge one at all.

Strangely, the part of the memo that BGR has released doesn’t mention anything about a cap like the one Sprint offers, so it’s possible that families and groups looking to upgrade en masse could really get stung here.

And here’s a question worth thinking about: what will the consumers have to say? Verizon Wireless got a very public earful when it was discovered that they planned to charge customers a $2 “convenience fee” whenever they used a credit card to make an online or over-the-phone bill payment. After one day, public pressure and scrutiny from the FCC forced Verizon to kill the plan in its tracks. Given enough exposure, AT&T customer may be inclined to lash out in a similar way.

Hopefully this move doesn’t inspire Verizon to try something similar. We’ve seen it happen before: Verizon killed their unlimited data plans one year after AT&T did, and AT&T began requiring data packages for messaging phones not long after Verizon implemented the idea. 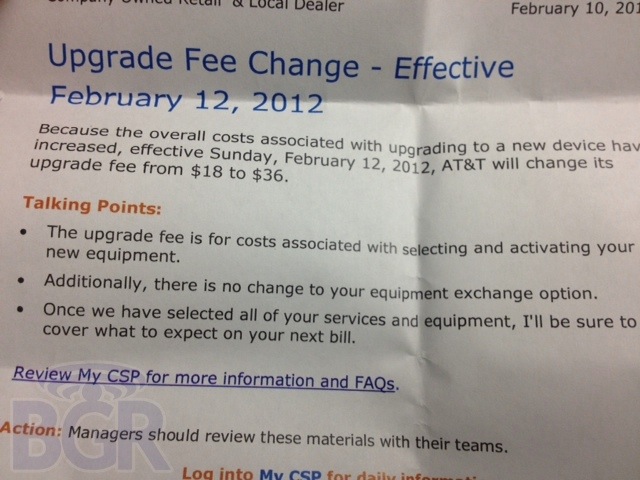