An interesting thing is happening in hardware marketing these days and I think Devin noticed it yesterday when he pointed out that Samsung, in their marketing of the Samsung Galaxy Note, is changing the script when it comes to gadget advertising, a tendency that is becoming more and more apparent in newer ads from many big players.

First, let’s look at the history of CE advertising. For most of the 1980s, computer marketing didn’t really exist. Take a look at this gem from a 1984 issue of Analog: 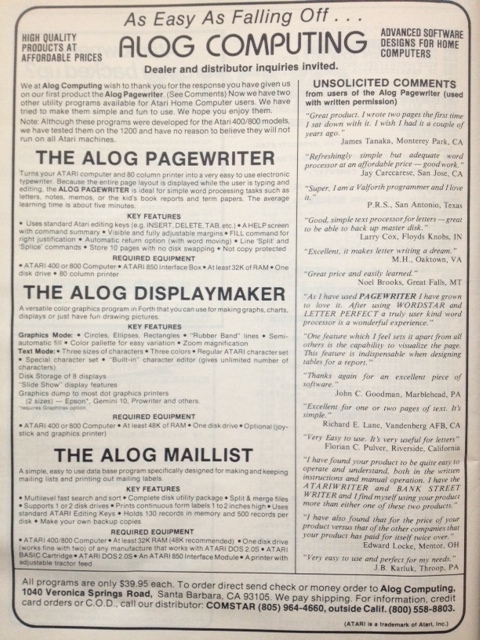 This is a true classic: an advertisement that tells nearly everything about the product in 10 point type. Similarly, you had games advertisements like this: 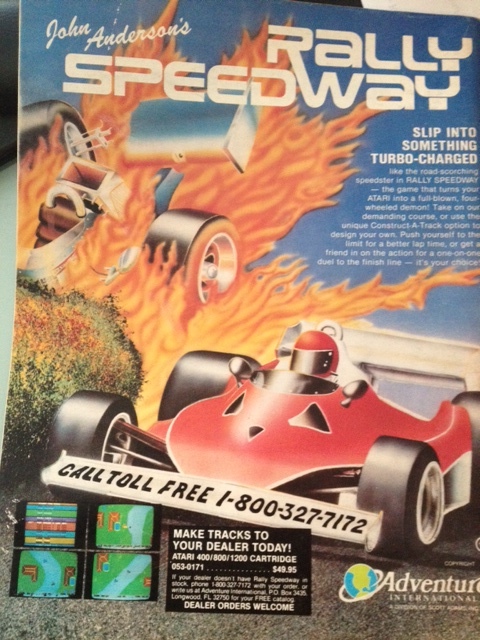 Here the “renders” (really acrylic on cardboard) take center stage while the actual game screens appear amazingly small in the lower left corner. The sale was about the sizzle because the customers knew that they weren’t getting much steak.

This continued for most of the 1980s and then into the 1990s. Let’s call this “nerd-to-nerd” advertising. I don’t mean that in a derogatory way, but if you were reading Analog in 1984, you probably were hurting for a prom date.

Suddenly, in 1996, however, Sony created a parallel message to their standard advertising by featuring futuristic scenes of models walking into cyberspace while holding Vaio computers. This was, to the best of my recollection, the first time that CE marketing was aspirational (I could be wrong, but this is the first time in my memory that a CE manufacturer didn’t talk at a demographic and instead suggested you could attain a demographic through their products.) Nerds, it seemed, were suddenly cool.

Thus was born a dual marketing message. The first message appeared in the trade press – in PC Magazine and Laptop and the like – the advertisements were a step removed from the two ads above: for geeks, by geeks. I remember, for example, the Laptop magazine ad sales team marketing the magazine as the one title that will ensure an advertiser that the reader will come out of the issue ready to buy a laptop or accessory. Interestingly, this sort of advertising has actually been supplanted by the gadget blogs who, in fact, do a lot of the nerd-to-nerd dialogue in their reviews. Who needs to buy ad space when someone will write a 2,000 word article about your product and you can expect thousands of people to read it in a famished frenzy?

The second message appeared in the glossy magazines and on TV. This was a lifestyle message, a message that swept much of the technology under the rug and instead focused on how the technology would fit in your home. For example:

Nintendo was selling “fun” and not hardware. Or take a look at this oddly prescient Lisa ad:

Or this downright embarrassing iPod ad:

The message here was one of utility. It said “You will have fun/work better/be able to rip music” with this product. In short it was “You can do X very well and we know you absolutely love doing X.”

For years you had two synchronous marketing plants. The script was simple in most cases: speeds, feeds, an image of the product. Aside from a few odd examples like the Jerry Seinfeld/Bill Gates commercials, most nerd-to-nerd CE advertising focused on hard claims. This sort of marketing appeared in magazines and newspapers and was focused on a crowd that, upon seeing a specific item, would immediately grasp its utility. The other side of the coin was the more esoteric lifestyle ad focused on non-adopters who knew they probably needed a computer but didn’t want to get bogged down. Thus was born an amalgam of the two, the “speeds and feeds” ad, allowing manufacturers to compete on nebulous claims of speed and memory sizes. For example, check out: 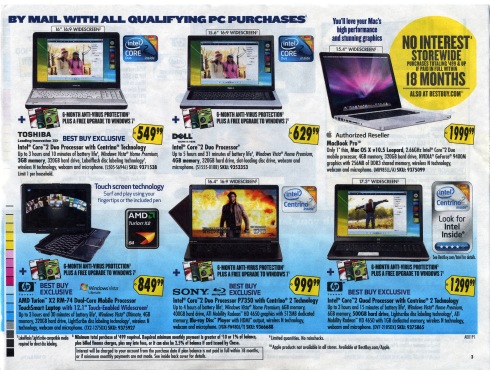 What do you notice? Numbers, numbers, numbers. You have prices, you have screen sizes, you have (in the Macs’ case) a clock speed. More is better, right? In fact, this style of advertising offered a false sense of safety for confused buyers. The Speed and Megapixel Wars drove manufacturers to crow mostly meaningless numbers until recently when the chip industry essentially flatlined. In the days when 800MHz vs. 1GHz meant something, it was fine to share those numbers. Now, when many more aspects of a PC are considerably more important, they don’t mean much at all.

In terms of television ads the focus was on “Us vs. Them:” Mac vs. PC, PC Hunters, iPhone vs. Everyone else. For example, you could argue that the recent Samsung ads maintained this nerds-to-nerds messaging but with a soupçon of ridiculousness, culminating in Superbowl Sunday’s wildly aspirational street party ad:

Additionally, marketers have gone in a very weird direction when trying to differentiate multiple Android products. When everything is a tablet, how do you stand out? Last spring there was a short push to grab the “early adopter” with tactics familiar with the speeds and feeds consumer yet with a bit of tongue in cheek. The best example of this? A nice little Verizon fantasy made for the Xoom last May.

As markets converge, there is less need to worry that the audience won’t understand a particular product. The fact that Verizon used the words “Tegra processor” on national TV points to the assumption that the watcher a) knows what a processor is at all and b) is aware that there is something called a Tegra. Intel pull off brand awareness with a cute jingle. Nvidia has a long way to go before “Tegra Inside” is a household name.

So where does that leave us? Well, it leaves us in the enviable position of being talked to like intelligent consumers and it leaves marketers grasping at how to market their products to a less sophisticated consumer. One solution is luxury branding. Take, for example, the above photo of Edward Norton and some woman holding a Prada phone by LG. Now, to be clear, the only people I know who own Prada phones are my niece and sister-in-law who bought them because they were on sale. LG knows that the hard-core geek wouldn’t look twice at a Prada phone in the wild. Therefore, they need to add a bit of glamor. In fact, Norton(‘s PR representative) writes in the press release:

Mr Norton also added: “It was a pleasure collaborating with PRADA and LG, both Global brands with impeccable reputations for being the most innovative and respected in their fields.”

Amen, guy who played a skinhead in American History X and a schizophrenic sociopath in Fight Club! See also: Lady Gaga working as creative director of Polaroid (a position that didn’t last past the duration of CES 2011, but at least she got benefits), Ashton Kutcher:

I also saw a move towards luxury branding at CES when Tumi (the luxury bag brand) show some iPad cases and other junk behind a red velvet rope. Tumi gear, to be clear, is actually made by Jasco, the same guys that license the GE brand to sell cut-rate electronic components. Rather than just show their wares, they kept things behind a roped off door, suggesting an exclusivity that is, in truth, quite alien at CES. Their booth was more similar to one of the booths I visit expensive wristwatch events than anything at CES I’ve ever seen. This sense of exclusivity is quite disheartening, especially in an industry that revels in open dialogue.

CE marketing is constantly in flux but recently it has been trending towards the vacuous. While I don’t long for the days of full page ads featuring reams of techspeak, I think that, as Devin noted, these marketers are trying too hard. Our generation has been raised on marketing and intense pressure rarely works anymore. Just because you can hire Ashton or Ed doesn’t mean you should and just because The Darkness wasn’t doing much this year doesn’t mean they should represent a product that is, at its heart, a very complex piece of machinery. Respect us, CE manufacturers, and we’ll respect you.