People really like Instagram. Founder Kevin Systrom recently appeared in a Best Buy Super Bowl ad paying tribute to mobile innovators, a testament to how far its come with a team of six. (Over 15 million users-far.) While Instagram is awesome (just ask Alexia) and offers a great tool for simple, hipster-elegant photo sharing, the startup hasn’t extended its reach to include mobile video. Yet.

After watching this formula bring Instagram more than a little attention, a number of startups have entered the mobile video sharing space, all clambering to become known as the real “Instagram of video.” Of course, Systrom hinted at Disrupt Beijing that video may well be in the company’s future. It makes sense for them — when they’re ready and can do it comfortably at scale. Obviously, with its sizable existing audience, that could spell trouble for the rest.

That being said, there are quite a few mobile video sharing startups that have a pretty good headstart. Klip has raised $10 million in venture capital, Tout was the service to broadcast the retirement of the one-and-only Shaquille O’Neal (who is now an advisor to the company), and we hear Tout is also in the process of raising a big series B.

Then there’s Vix and Socialcam, which spun out of Justin.tv, found some good early traction, but is returning to Y Combinator to work on its strategy rather than go the typical VC route.

The competition has certainly been heating up in the mobile video space over the last year, but, even so, yet another — Viddy — thinks that it can stake a claim on the “Instagram of video” title. (Though of course they want to throw “social” into that title.) For those not familiar, like it’s mobile video brethren (with some exceptions), Viddy enables users to shoot, “beautify,” and share 15-second video clips directly from their mobile devices.

The startup saw over 40 million app views in January, using celebrities and influencers to try to separate from the pack, allowing users to create custom premium Video FX layers and, in turn, giving artists, movie studios, etc. a nifty way to promote their brand through mobile video. For example, Viddy partnered with Disney for the release of the new Muppets movie, and recently created its first “premium artist production pack” for T-Pain, which allows fans to create 15 second music videos with a video effects layer featuring T-Pain’s signature Steam Punk TV effect.

At the time, T-Pain explained his partnership with the startup as a way to connect with fans through yet another social channel: “Viddy lets me connect with my fans in a whole new way through mobile video. 15 Seconds at a time… I hope people download my new Pack, capture cool video clips and share with the world what they’re doing at 5 O’Clock in the morning.” 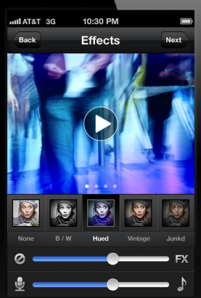 To further boost its growth (and development), Viddy today announced that it closed a $6 million round of Series A financing. The round was lead by Battery Ventures, along with other existing investors like Greycroft Ventures, Qualcomm, Bessemer Ventures, and angels that include Sky Dayton (founder of Earthlink, Boingo and Business.com), Jarl Mohn (founder of E! Entertainment Television and Founding President of Liberty Digital) and Christina Brodbeck (YouTube’s first employee).

The round brings the startup’s total funding to $8.2 million, which Viddy plans to use to accelerate international expansion, and bring its service to more devices and platforms. The startup’s free app is currently iPhone-only, but Android, iPad, Windows, and BlackBerry apps are in the works.

Now at 1 million users, Viddy’s key value proposition is that its video creation platform features custom video overlays and audio effects from users’ favorite musicians, movies, and celebrities. These 15-second videos can then be shared automatically across social platforms like Facebook, Twitter, and YouTubes.

Of course, any mention of social photo/video sharing models would not be complete without mentioning Color, the startup that famously raised $41 million right out of the gate for its photo sharing app, spurring plenty of bubble-talk, which then proceeded to fail. Schadenfreude ensued. The startup has since pivoted, relaunching to “reinvent the status update” by way of 30-second, muted video clips.

Color’s use case is different than that of Viddy, as it wants its updates to be thought of as visual status updates that walk the middle ground between videos and photos. Again, not a new concept, and not particularly earth-shattering, although Color has plenty of backing and access to some new Facebook APIs that help its cause.

I haven’t had a lot of time to play around with these apps yet, but it’s clear that there’s a lot of demand for social, mobile video sharing, and we’re seeing different models go through the testing process. It’s likely that not all of these companies will survive, and with Instagram potentially in the future mix, it’s difficult to say who’s going to come out on top. Viddy has plenty going for it, as do many of these startups, so it will be interesting to see which startup emerges as the leader.

What do you think, reader? 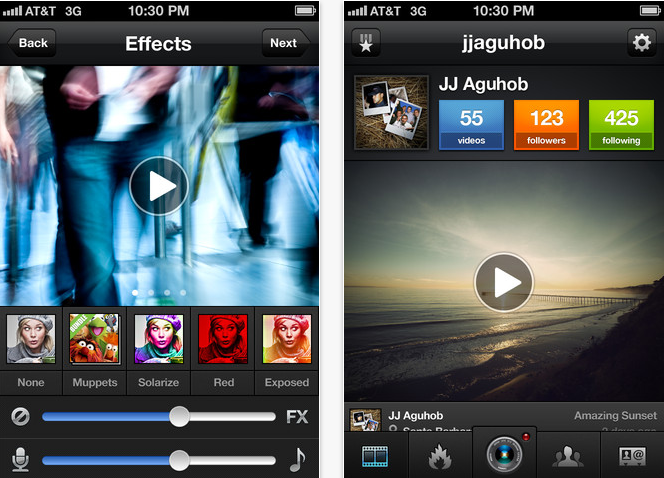