Last year, Nick Paumgarten wrote an interesting article for The New Yorker that detailed the rise of online dating and the effects it’s had on web culture. What struck me most were some of the eye-opening statistics he shared about the size and popularity of the industry, beginning with the fact that fee-based dating sites have become, collectively, a billion-dollar industry — that “one in six new marriages is the result of meetings on Internet dating site.” What’s more, online dating is now the third most common way for people to meet.

It’s clear that much of the early blush (read: stigma) around using online platforms to meet new people and pursue relationships has worn off. But anyone who’s spent any time on dating websites knows that plenty of friction still exists, whether it be in the awkwardness of online-to-offline interaction, the inherent dangers of meeting an eStranger, or the problem of having to rely on algorithms and science to find your perfect “match.” As much as dating sites strive to find a scientific method (or a more efficient way) by which to introduce us to the loves of our lives, many of them still feel impersonal and gimmicky, and, as Paumgarten points out in his article, it’s for this reason that online dating remains an isolating pursuit.

Sean Mills, the CEO of Nerve Dating, agrees that online dating today still feels like a search for the best deals on airline tickets. It seems as if, in playing online games, we go to buy more missiles, and in doing so suddenly find out that we’re the proud member of an online dating community.

Dating sites will do anything to attract new customers, promising true love, infinite happiness, and walls filled with fewer cat pictures. And thus, people are itching for a better way to meet their match, and they’re no longer content with an industry where the prevailing methodology for introducing us to other humans is based on these gimmicks, or on pseudoscience, robot matchmakers, and the deployment of virtual fruit, as Mills said in his introductory letter to the Nerve community.

In 1997, Rufus Griscom and Genevieve Field launched a website and eMag dedicated to sex, relationships, and culture called Nerve. After spending eight years as president of everyone’s favorite satirical news source, The Onion, Sean Mills took over as the chief exec at Nerve, looking to bring the same brand loyalty and affinity people had for The Onion to Nerve’s community of sex-addicted readers. Early on, Nerve was defined by some amazing editorial content, boosted by contributions from writers like Jonathan Lethem, Chuck Palahniuk, and Joyce Carol Oates (to name a few), and it evolved into one of the few early success stories of New York’s Silicon Alley.

Created as an online sex magazine that both men and women could enjoy — a less raunchy, more highbrow Penthouse, with broad appeal — Nerve has since become a site dedicated more broadly to love and culture. Having witnessed the success of The Onion’s dating site firsthand, which capitalizes on a more relaxed and humorous approach to online dating, Mills officially re-launched Nerve Dating in New York in December as an extension of the existing site.

Because Nerve already had a loyal readership and fanbase (about 2 million monthly uniques), there was a readymade audience for Nerve Dating, making it easier, Mills says, to reach critical mass. When creating a new dating website (or really any other consumer-facing web business), scale is one of the biggest challenges, and online dating really doesn’t work unless there is a crowd of people on the site ready for love. Nerve Dating already has over 10,000 users, and Mills says that the team is already hearing success stories.

Today, the team is launching Nerve Dating in San Francisco, with plans to continue rolling out across the U.S. The main thrust of Nerve’s bi-costal dating service is to create a platform that “celebrates individual voices,” without the taxonomy inherent to dating websites that tends to lump people into categories so that matching technology can do the heavy lifting.

As Mills tells us, the challenge facing the users of online dating sites is not so much in figuring out whether you like someone (people are already pretty good at doing that on their own), but simply in starting the conversation. Walking across the room to introduce yourself to someone you don’t already know? Gulp. That can be challenging, and it’s something that sites like Commonred identify with, as they attempt to meld the meetup and “new people” discovery space, inhabited by startups like Sonar, Meetup, and LetsLunch, with professional networking sites/apps like Branchout and Hashable.

Just as Shaker launched to bring a fun, interesting way to socialize on Facebook, Nerve is trying to make dating more like an enjoyable cocktail party, something that’s more natural and casual than an awkward blind date.

Thus, on Nerve, users can actively share their thoughts and opinions about restaurants, bars, movies, music, and books, and are instantly introduced to other people who enjoy the same things. Mills equates it to seeing someone at a bar who’s wearing a t-shirt with your favorite band on it — this makes it much easier to approach them and strike up a conversation. 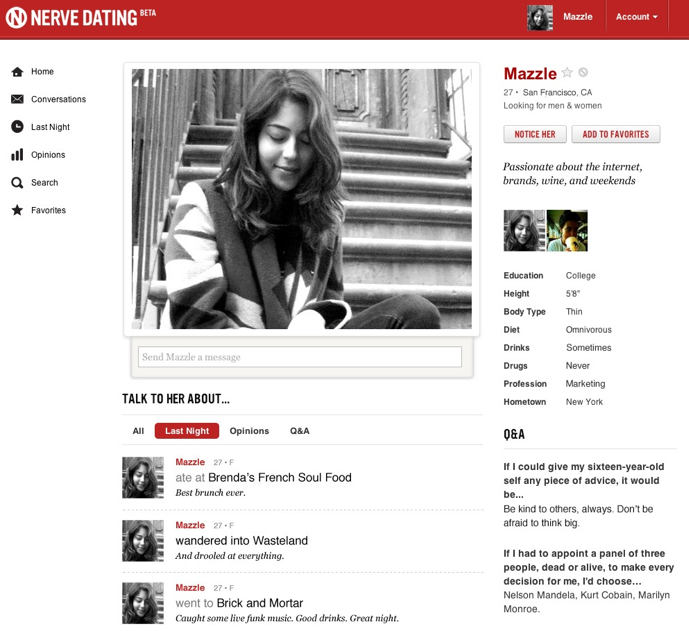 On the other hand, an online dating site lives or dies based on the attempts it makes to make its users feel safe and secure, and Mills believes that many sites make the mistake of trying to offer an online dating service for free. If you can make it affordable, he says, it’s to everyone’s benefit, because it boosts the quality of the service offered and helps to keep out unsavory types. (Neve Dating costs $20 a month.)

And to that point, Nerve has made it their mission to monitor activity on the site, and the team keeps a close eye on suspicious activity, flagging users for abnormal behavior, and booting them if necessary. In fact, Nerve recently flagged a user for setting up what looked to be a fake profile, and when they contacted the owner, they found that the profile was created by none other than OkCupid Co-founder Chris Coyne. (It’s always a good sign when your nominal competitors are setting up profiles on your site to “check it out.”)

While Nerve Dating costs $20 a month, users can respond to messages they receive for free, unlike many other sites. The idea here is to encourage people to interact with each other, to socialize, and reach out, but initial messages are kept to a Twitter-length 141 characters, with the idea being that this takes the pressure off and is a little more casual.

Nerve also has a “Last Night” feature, which Mills says is a bit like a checkin, in that users are encouraged to write what they did the night before. And, on that note, an additional perk is that Mills says that he’s enlisted some of the writers at The Onion to pen questions about culture and what users were up to last night.

The site will also soon be introducing something which is now internally called “The Like Machine,” which will enable the site to create virtual affinity groups, and help daters meet other people who are interested in similar music, books, and so on. The topics and categories that you follow will show up on your profile, and the site will also be hosting a database of categories people can search through to find users with similar interest graphs. The site also has a “Notice Him/Her” function, which is akin to “poking” someone on Facebook, a nonverbal expression of interest.

Building a profile on dating sites can be excruciating, and this is designed to make that process easier, as few people enjoy creating their own personal statements for dating websites. The process is awkward to say the least. When I asked Mills if the team had plans to establish Facebook connect or allow users to pull in their other social profiles, he said that, interestingly, dating sites that implement Facebook Connect have seen a 50 percent drop in signups. This seems to be evidence that, while people want their dating lives to be social, it’s all about discovering new people, they don’t want to be followed by their social graphs, people want to be anonymous. Though Mills is open to potentially integrating with Spotify, or GoodReads — sites that would enable people to share personal information without porting their entire social profiles.

Nerve is also hoping to leverage the community its created around its lifestyle and culture publication, hosting live events for people to mingle and hang out, to facilitate yet another opportunity for users to move their online identities into the real world.

Innovating in online dating is tricky, and Nerve seems to be off to a great start by giving people a more casual platform through which to interact and meet new people. It’s a tough nut to crack, but check them out at home here, and let us know what you think. (Oh, and mobile apps are in the works.)

Readers interested in testing out the site can get two free weeks on Nerve Dating by registering here.