Wuh oh, Samsung — better watch your tail. While Apple might not be seeing any impact (be it positive or negative) on iPad sales from the launch of the Kindle Fire, Samsung’s Galaxy Tab ought to be feeling the heat.

Tapping into the data provided by their app analytics platform (which they estimate has found its way onto around 90% of the Android devices out there), Flurry highlights a few surprising numbers. 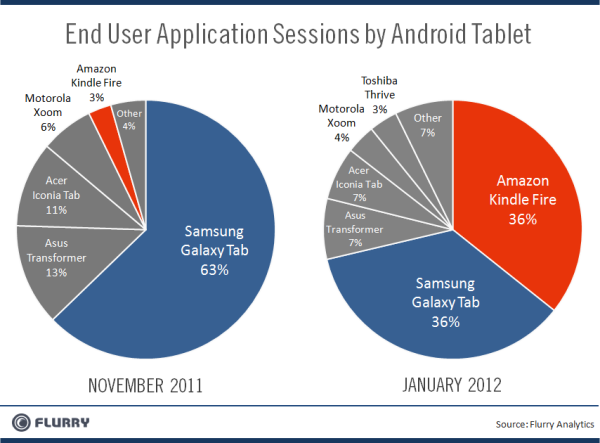 This one’s pretty interesting, as it measures how many people are actually using their respective Android tablets (as opposed to how many bought them and let them sit on a shelf somewhere). It measures “User Application Sessions”, which is defined as a user opening an application and using it for at least 10 seconds before closing it.

After launching in November, the Kindle Fire accounted for just 3% of application sessions. Just three months later, it’s at 35.7% — pretty much neck and neck with Samsung’s 35.6%.

Think about that. The Kindle Fire, which has been out for 3 months, is seeing as much cumulative usage as a series of devices that have been out for an entire year longer. Even if the number of Galaxy Tabs sold well outweighs the number of Kindle Fires sold (and it likely does — again, the Tab series has been out for much longer. It’s also available around the world, whereas the Fire is US only for now), Fire owners appear to actually use their devices more often. 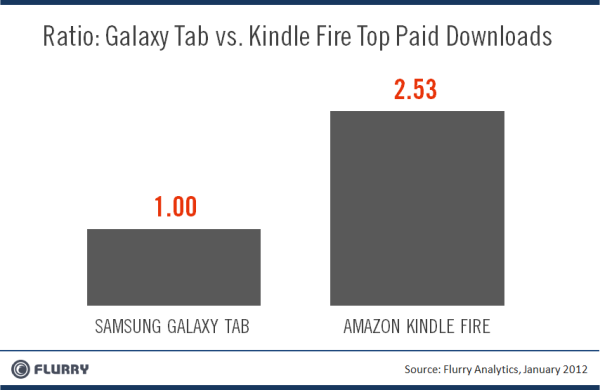 Next up, Flurry looked at the download numbers for 5 applications that were in the Top 10 on both the Android Market and Amazon’s App Store. To boil it all down: for every sale of one of these top apps to a Galaxy Tab owner, there were 2.53 sales to a Kindle Fire owner. Again, consider how much bigger the Galaxy Tab audience is (Flurry estimates that it’s at least double) — and yet, the Kindle Fire owners are buying more.

If you’re an Android developer wondering whether or not you should target the Kindle Fire and Amazon’s App Store, the answer seems to be an incredibly clear “Yes.”