JNSQ, the first independent style magazine for the iPad, is making its public debut today. The app, created by former Beauty.com marketing manager Melissa Middleton and angel investor and stealth startup founder Fritz Lanman, features similar content as to what’s found on the online version of the company, at www.jenesequa.com, but is published monthly – like a real magazine.

The magazine has actually been live in the app store since October, so you may have stumbled across it on your own. But that was a “soft launch,” meant for testing and experimentation, as opposed to today’s public debut. 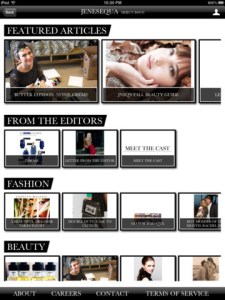 What’s perhaps more interesting (at least to those of you whose interest in fashion goes about as far as “what t-shirt should I wear today?”), is the platform on which JNSQ was built. Developed by an ex-Amazon employee hired on contract by the company, the magazine was created within a custom-built CMS system for building iPad magazines. That’s going to be useful going forward, because founder Middleton has ambitions to take JNSQ and expand it, turning the company into a new, digital media empire. Or, as she puts it, “the Conde Nast of digital.”

As for the user interface, it’s highly usable, clean, and uncluttered. There are integrated, but unobtrusive, sharing, bookmarking and favoriting buttons. And beneath the articles, a small “related content” section directs readers around the magazine in a more intuitive, iPad-friendly way. The app also doesn’t spend ages downloading content to the iPad upon launch, and the homescreen is broken up into clearly marked sections: Featured Articles, Fashion, Beauty and Lifestyle (think health, home, travel, etc.). 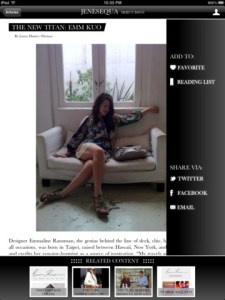 JNSQ’s content is created by a team of 21 editors who contribute content to the app on deadline – like a real magazine. Their work is edited and scrubbed prior to publication, again, just like a real magazine. However, JNSQ will update throughout the month with new content – and will soon use push notifications (via Urban Airship) to alert readers of the additions.

Another difference between JNSQ and a traditional magazine is that the editors are bloggers. “Readers are trusting bloggers because we’re more accessible, it’s not ‘industry.’…Bloggers are non-policed, it’s fun, and they can put more personality into it,” Middleton explains. The bloggers’ voice throughout JNSQ will hopefully appeal to the right kind reader, she hopes: “our audience is the everyday woman. She’s not sitting at fashion week, but she still has a taste for style.”

Says Middleton, she got the idea for JNSQ back when the iPad first came out. “I was looking for style magazines,” she says, “and there was nothing. The demographics of the people who were buying the iPad at the time were men.” Obviously, that’s no longer the case – the iPad is for everyone. There’s a huge market for appealing to the style-savvy women’s mag crowd. Or really, anyone who loves fashion and style, regardless of gender.

JNSQ is too new to be sharing download numbers or active users numbers yet, but Middleton says the engagement metrics are “unbelievable.” So unbelievable, in fact, that one potential investor didn’t actually believe them. He requested she send a screenshot of proof. The metric that he couldn’t grasp? Users were spending an hour and a half in the app per session, on average.

Hey, that’s kind of like a real magazine. Maybe even better.