SXSW 2012 is sneaking up on us; believe it or not, it’s just around the corner. As you may know, Austin’s music/film/tech conference attracts big names, tons of press, and notable companies each year — geeks flock to the event just as they do for CES. On the tech or “Interactive” side, there’s a lot of hoopla and way too much media coverage, but some interesting startups do still manage to emerge (or at least solidify their reputations) at the festi-conference each year. Foursquare and Twitter, to name two, both owe tips of the cap to SXSW.

Those traveling to the festival always start early, as hotels fill up fast. And since these conferences will cost you a bit more than a ticket to Burning Man, many of the more adventurous souls look for accommodations that are cheaper (and more exciting) than that offered by some measly hotel. Naturally, it’s a big time for the hot peer-to-peer accommodations rentals space — in other words, for startups like Airbnb, Wimdu, 9flats.com, Crashpadder, and iStopOver — to name a few. The latter, for example, has already booked all of its available rentals for SXSW. (While Airbnb still has some openings.)

In a piece of news that may just be relevant for SXSW attendees this year, today we’ve learned that the aforementioned and Canadian iStopOver, which lets people rent out their extra space and offer travelers local experiences at affordable prices, has partnered with a lesser-known startup from Austin, called GuideHop, to “help change the way people experience new and familiar places.”

Just as Airbnb and its ilk have taken off, there’s been a lot of excitement around the broader social travel space lately (see Semil’s post for some examples here), and GuideHop has been hoping to get in on the action by offering a service that enables locals to post their own guided activities for those curious “experience seekers,” who’ve traveled from afar — joining Gidsy and Sidetour in that regard. Both GuideHop and iStopOver’s services allow locals to post their available rentals and experiences for free and are designed to let hosts and guides make a little extra cash by sharing their favorite activies and spare homes and bedrooms — and finding those willing to pay for the home (or the experience).

The partnership, the GuideHop team says, is designed to give customers a full integrated peer-to-peer experience, where anyone can plan an expedition by finding a place to stay through iStopOver, and discovering nearby activities with GuideHop.

Though iStopOver hasn’t created nearly as much noise as Airbnb or clones like Wimdu, which raised $90 million last June, it still offer over 80,000 properties in 92 countries, so it’s a big strategic win for GuideHop — and a vote of confidence.

The Austin startup, which launched in October, has grown fairly quickly, and now has a total of 679 activities (ahead of Vayable, which launched six months prior). However, at this point, it is mainly focused on Austin, and hopes to take advantage of the SXSW bump when the circus comes to town, offering attendees an opportunity to get out and see the sights under the guidance of some knowledgeable locals. What kind of local activities, you ask?

Activities posted thus far include “spelunking to an art gallery,” exploring east Austin’s urban farms, a ride with a scooter gang, a bike coffee tour of Austin, etc. etc. (More on how GuideHop works here.) How can you say no to spelunking and art galleries?

There are a million ways to find local activities, but GuideHop hopes to capitalize on the growing buzz around peer-to-peer marketplaces and social travel. Partnering with the big p2p rental marketplaces is a great way to reach a broad audience, without having to deal with quite the same drawbacks. Hopefully iStopOver is just the beginning.

The startup is currently raising its initial round of funding, so check it out and stay tuned to see if they come out the other side with some traction. And obviously, having the mythical “jackalope” of travelers’ folklore in their logo also helps their street cred significantly. 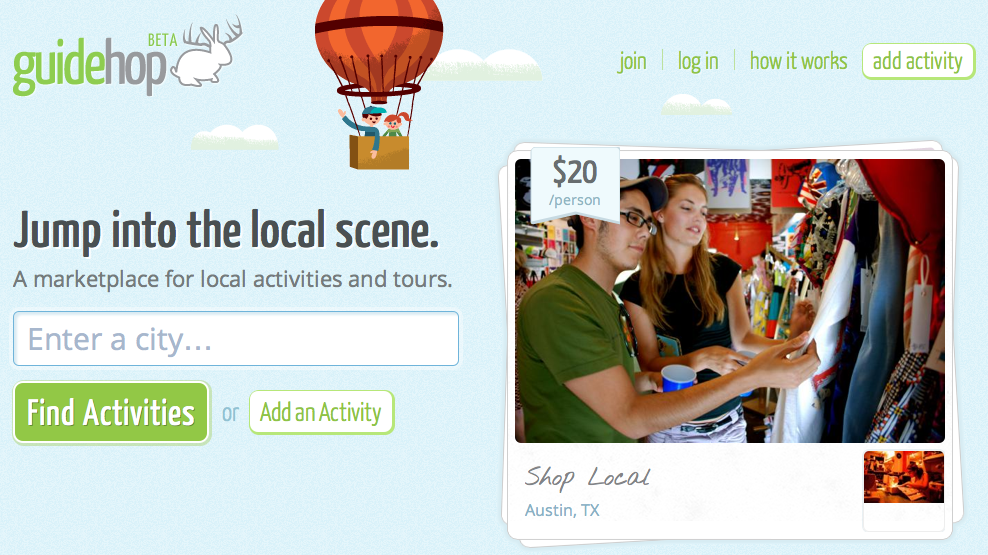