Aviary, the company that makes it easy for mobile developers to integrate image editing into their apps, has a major launch today: they’re introducing an overhauled version of their mobile SDK that’s both more powerful and significantly better looking than the previous one, which launched in September.

You may associate Aviary with the startup’s advanced suite of web-based image editing apps, which is what it focused on for years. But last year it shifted toward this developer-facing mobile SDK, which allows third-party developers to quickly integrate photo editing, filters, virtual stickers, and other related features into their applications. It’s essentially a drop-in photo editor, and given how popular image sharing apps like Instagram are these days, it’s no surprise that plenty of mobile developers are baking it into their apps.

Today’s update, which is available for both Android, iOS, and web apps includes additional image effects and a refreshed UI. It also paves the way for Aviary’s monetization plans: developers will be able to sell special filters and stickers via in-app purchases, and Aviary will take a cut of these transactions. These monetization features aren’t available broadly yet — Aviary is currently rolling them out to select partners. The first application to include the SDK (which will let you try it out for yourself) will be Pic Stitch (the updated version of their app is currently pending approval from Apple and should be up soon).

Alongside the update, Aviary is also sharing some stats: usage of the SDK is growing 50% a month (measured based on how many users are accessing the editor and editing images). And across the 300 partner web and mobile apps to have integrated the SDK, users are editing over 10 million photos each month. Aviary says that a lot of this growth is concentrated among its top applications (it grows as they grow), but says that it’s seeing a nice long-tail in usage too.

To help reduce confusion over the mobile SDK and their old suite of image editing tools, Aviary recently revamped its homepage at Aviary.com which now focuses on the developer-facing SDK. If you’re looking for the old, consumer-facing image editors, you’ll need to head to advanced.aviary.com. 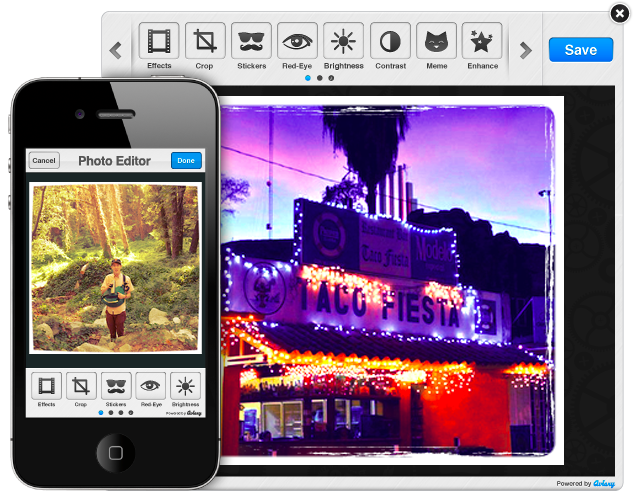