Technology is in the process of bringing change to every piece of the health industry — wellness, fitness, healthcare, medicine — you name it. And as it always seems with introduction of new technologies, it’s awe-inspiring how quickly they can transform entire industries yet, at the same time, make us realize just how far we have to go (or how far behind we really are). The health industry has been touched (and defined) by cutting-edge technology for years, yet its relics, legacy infrastructure, paper-pushing, and archaic procedures are as obvious today as ever before.

Nonetheless, today, we really seem to be at an inflection point. (Or do we hear that every year?) The current landscape is full of inspiring examples of how technology is changing the most fundamental aspects of how we keep track of our own health, how we approach diagnostics, treatment, and more. Earlier this month, Josh laid out six trends in healthtech that could have a big impact on medicine in 2012, and last week veteran Silicon Valley investor Vinod Khosla wrote an epic analysis of the significant role “Doctor Algorithm” could play in changing the literal and metaphorical face of healthcare. It’s pretty exciting, if not a little frightening.

There are many factors in play that are affecting the transformation of the health industry, but much of it seems to begin with — what else? — the growing ubiquity of cell phones, smartphones, and mobile devices. Early last year, PEW Research was already reporting that 17 percent of mobile phone users were using their devices to look up health and medical information, and Juniper recently estimated that 44 million health apps were downloaded in 2011. 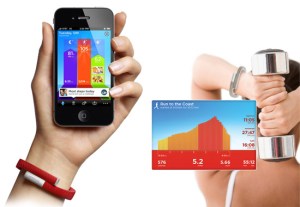 The amount of health data is exploding in line with the growing adoption of health and medical apps, much of this thanks to the increasingly wearable, portable and user-friendly devices using smart sensors that can capture and transmit all kinds of biometric data. Smartphones are connecting with these diagnostic apps and health-measuring devices to help you stay on top of your health and fitness — like Basis’ heart and health tracker, Lark, Fitbit, and Jawbone’s Up — to name a few.

These “quantified self” devices are hot, as they help scratch our geeky itch for more data, and bring the doctor’s office home with us — or out on our jogs. The options are many when it comes to diagnostic and tracking tools like AliveCor, which helps you measure your heart rate from your phone (and is not yet available in the U.S.), or Philips’ Vital Signs Camera that measures your heart and breathing rates using your iPad camera — or Skin Scan, which measures your risk of skin cancer from your iPhone. 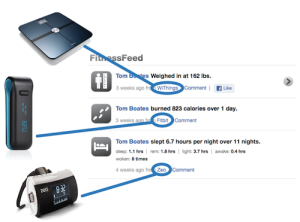 These apps and devices run the gamut from fitness to the more directly medical, and increasingly, they’re combining with dashboards and the cloud, because how useful is a single app if it can’t talk to other similar apps, or connect with your health devices, and aggregate all that data in one place for a complete Health Data Round Up … ? Startups like RunKeeper are building Health Graphs and releasing APIs to do just that (and FitBit has joined in, too). This is certainly a big piece of our healthtech futures: retrievable EHRs, plus medical device data in the cloud.

Mobile devices will also change the way that we communicate with our doctors, as physicians may help describe possible treatments or procedures to patients on an iPad using multimedia, visual cues, genomic/anatomical maps, etc., prescribe post-treatment apps to our smartphones so that treatment doesn’t end once you walk out the door of the hospital, or become a conduit for modern communication platforms, a la Skype, that will facilitate remote checkups, treatments, diagnostics, through the phone, or over video. Got a strange looking rash? Take a picture, or scan it on this app. Telemedicine is there in a pinch!

Of course, while the opportunities are many (and the progress exciting), let’s be honest, the “mHealth” space is still nascent. It has a long way to go. Research2guidance recently released a report which found that the mobile health app market saw a sevenfold increase in total revenues in 2011 — to a total of $718 million. On the one hand, while this total is tiny compared to the $7 trillion global health industry and shows how small the industry is today, it also makes the current exponential growth of mobile health (as seen through apps) crystal clear. 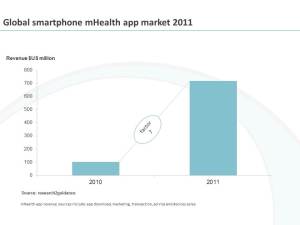 The flip side of the coin, however, is there, and it’s important to point out, because not everyone is talking about it. For example, in November, I covered ABI Research’s research report on the mobile health app market, which forecasted that the mobile health app market would quadruple to $400 million in revenues by 2016. So what? Well, if not obvious, there’s a bit of discrepancy between the $718 million in revenues last year (and estimated $1.3 billion in 2012) proffered by research2guidance’s report and ABI’s $400 million total revenues projected by 2016. One is slightly more conservative.

Sure, projections are notoriously variant, and believe me, ABI was not alone in their projections. Many analysts/firms were close to $400 million by 2016, while some said by 2015. No one had the same numbers. But, beyond the vacillations inherent to predictive analysis, there’s obviously some real categorical confusion over just how to define mobile health, mobile health apps, etc. Should the definition of mobile “wellness” spill over into how we define “mHealth”? How should we define the distinction between mHealth and “mMedicine”? Physicians should have their own apps, not all of which are consumer appropriate, but the ability to prescribe them when necessary? What constitutes a mobile medical app versus a health app, or device? The boundaries blur quickly.

This may seem nitpicky or inconsequential, but it’s indicative of a much larger problem. Again, there is a lot of excitement around the healthtech space — it’s palpable — as can be seen in the number of seasoned entrepreneurs turning to the health space to tackle the many parts of it that are broken. Rock Health, a healthtech-focused incubator arose to meet that growing demand, as have others. And many startups are focused on consumer-facing problems that try to help us do more with health data, help make appointments, save money on health insurance bills, the next doctor visit — or help us refill our prescriptions.

Bless them, we appreciate the movement to empower consumers in healthcare, but as more and more startups, apps, devices, and services pop up in the space, how do we know which are safe, and which apps we can trust and let our children use? Well you can bet your ass the FDA has something to say about that. Last summer, they published their guidelines for mobile health apps. The FDA plans to regulate mobile health products, which, as much as government intervention is annoying, is a good thing. Imagine the potential for danger as medical and health apps proliferate, both in areas of privacy and physical treatment/diagnosis. 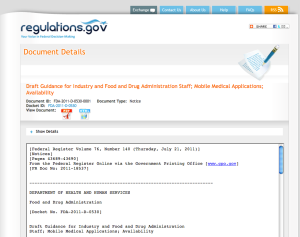 But, just as we found that the variance of statistics on the mobile health industry is due to a problem in defining terms, the FDA’s language when it comes to laying out guidelines for mobile health products is equally broad — or some would say equivocal. It’s not clear what kind of mobile health apps constitute mobile devices, which don’t, and which apps should be subject to regulation. We’ll have to wait for final word, hopefully sometime in 2012. More here.

Many entrepreneurs and startups are seeing the opportunity in healthtech and want to get in on the game, but many are likely not aware of how to orchestrate HIPAA compliance or how to develop their apps, devices or services so that they are in line with the FDA’s regulations. Which, by the way, have not yet been distributed. So, if you’re developing an app that monitors heart rate that can be shared with physicians in the event of a medical emergency, as Mass Device points out, this might end up constituting “medical decision-making” and thus categorize your app as a medical device and make it subject to a host of regulations. Say hello to years of waiting for approval.

It would be nice if the FDA and others would make education a priority, so that all could familiarize themselves with compliance and making safe health apps and devices, but current regulatory issues are complicated and open to interpretation. d4, a U.K.-based non-profit focused on improving patient care through technology, has addressed some of these issues and is seeking to lay out some easy-to-consume guidelines.

Or take Happtique, an interesting startup we covered a few months ago, which brings mobile app stores to healthcare professionals. In other words, Happtique offers hospitals, physician practices and more, the ability to create individually branded, secure, multi-platform app stores that support employees and doctor use (for use internally in practices), as well as supporting consumer, or patient use outside the confines of the hospital. It may seem niche, but development of mobile apps for hospitals and care providers is growing and will be an important part of our future health system. (There should be Code For America for hospitals, practices, and providers.)

Happtique recently established a certification program that it will use to certify mobile healthcare apps, by specifying quality and performance standards that focus on clinical appropriateness and technical functionality.

This is a good start, and certainly incubators and accelerators like Rock Health can help their startups familiarize themselves with these issues, too, which is something to consider for first-time mobile health entrepreneurs or app developers looking to attack the market. It’s not as easy as jumping into casual game or social networking development.

Obviously, consumer protection is extremely important when it comes to medical applications and devices, but as always, that leads to regulation, and overregulation, which in turn can impede innovation. Getting ahead of the curve now in terms of regulating devices and apps is of utmost importance, as long as we find the right balance between keeping patients and consumers safe and allowing for the requisite envelope-pushing and innovation.

In the end, when we get excited about the emergence of the mobile health space, and how technology is improving our daily lives, it, as per usual, has to be tempered with the requisite anxiety over whether it will be allowed to grow, or we’ll eventually be living in a scenario where the most helpful and innovative apps never see the light of day. The mobile health space is booming, and we’ll continue to see leaps forward in 2012, let’s just hope it stays that way.