Facebook has just started letting any developer on its platform run advertising offers that pay out directly in the native currency of their games. Let’s say you’re playing Ravenskye City, a new simulation-exploration game from Lolapps, and you want to get some more of its Skye virtual currency without buying Credits. You can now take a selection of offers — signing up for a Flixster movie account, for example — just by clicking through the “Earn Skye Credits” interface.

This is a big deal for many developers, because for the past year or so Facebook has restricted in-game, native curency offers to only the largest companies on the platform. That is, Zynga, EA’s Playfish, Disney’s Playdom, and a few of the others who had signed on to the exclusive five-year commitment to use Facebook Credits as their exclusive virtual currency in games.

The restriction had given these big developers an advantage in making money on the platform, because users are more likely to want to take an offer if they can see that it’s directly linked to buying virtual goods in the game they’re playing.

The big picture is this.

A final chapter is closing in the long-running drama around virtual currencies and offers. Everything is now back to the way it was when developers first started running offers in their games back in 2007 — except that these offers are not scams, and that Facebook is taking a 30% cut of everything.

Considering that Facebook is going public soon, this move could also help it further diversify the sources of its Credits revenue beyond Zynga and a few other big developers. That’s something public investors would like to see. 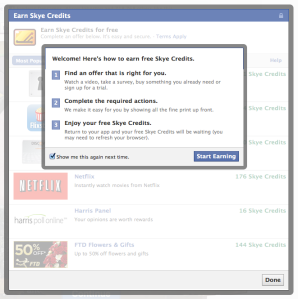 Time for a little history. Before developers had fully figured out how to get users to pay money directly for virtual currencies on Facebook, they’d discovered that some users were willing to take offers to obtain them. As the virtual goods business model evolved with the Facebook platform over 2007 and 2008, developers began optimizing offers for revenue in the same in-game native currency form that is once again available today.

The problem, then, was that the offers that brought in the most revenue were basically the sorts of online ad scams that you can find elsewhere on the web, like ringtone subscriptions that you can’t unsubscribe from. Some users have wanted virtual currency so badly that they’d take these offers, then discover crazy charges on their credit cards later on.

Instead of trying to provide offers from legitimate companies — the ethical and sustainable thing to do — many developers and offer providers focused only on making as much money as possible. They disregarded the occasional critiques from bloggers including myself during this period, until TechCrunch founder Michael Arrington went after them in his extensive ScamVille series… at which point Facebook started regulating the market.

Facebook’s solution proved to be on a much bigger scale, though. It decided to introduce its own virtual currency, Credits, over the course of 2009 and 2010, ultimately making it mandatory for all developers. The single currency both helped build user trust around virtual goods purchases, and gave Facebook a way to take a 30% cut of all the revenue that developers were bringing in. That’s something it hadn’t had a way to do before.

Offers weren’t an inherently flawed concept, they’d just been amorally implemented by developers and offers service providers. Facebook ultimately brought them back — within Credits — via a special arrangement with Trialpay, the company that sources most of the legitimate offers you see on the site today. The main reason Trialpay got this deal was that it was an experienced offer provider on the web, that was relatively new to the Facebook platform, that had been running quality offers with Playfish.

Developers have been able to use their own branded currencies within the Credits system since last year (where the currency you buy looks like its in the game, even though Facebook is still running the system and taking a cut). So why did it take so long for Facebook to bring the rest of the platform up to parity with the big developers for native offers? Technical issues created some delays, apparently, say industry sources, although that doesn’t really explain the long time lag. 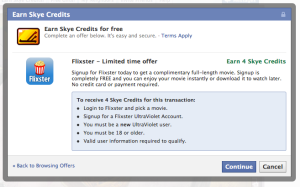 The change on Friday means big newer developers, like Kabam, Wooga, Kixeye and Lolapps and King.com, will now be able to bring new revenue through the native integration (and so make money for Facebook).

The entire virtual goods business on the platform (mostly direct payments for currency, but some offers) will be worth $1.6 billion in 2012, according to the Inside Virtual Goods report. Zynga has dominated. A calculation of AppData numbers by Lazard Capital Markets shows that Zynga’s market share among users of the top thirty games on the platform went from 50% in October of 2009 to 58% last month. Meanwhile, its advertising revenues grew 224% in the first 9 months of 2011, according to its S-1 filing, and around half of that was offers, according to an industry insider.

So, after all the drama and years of  Facebook is now headed towards an IPO with a platform that’s cleanest and most level that it’s ever been, that’s providing it with approximately $500 million in annual revenue — and about to go up because of the change.