Many of you who have been using streaming music service Spotify for free in the US from when it launched last July are now going to have to start paying, as Business Insider points out today.

The reason is the company’s policy of limiting free usage to ten hours and/or five plays per track every month, after the first six months of the trial. Full access, if you haven’t paid for it yet, will cost you $9.99 per month, with partial access (no mobile, no offline, etc. but also no ads and no streaming limits) at $4.99.

What we’re really looking at here is two parts of a conversion funnel — the traffic growth part, then the paywall part — for what appears to be a legitimate contender to iTunes (and any other music service out there). Presumably, that was the plan.

When I say “you,” I specifically mean all the people who joined because of the special integration with Facebook that Spotify has had going since September. Those people won’t be hitting the six month limit quite yet, but there’ll be a lot of them, judging by all the growth Spotify has been enjoying on Facebook lately.

Today it has 5.4 million daily active users (although the numbers fluctuate) and 12.3 million monthly active users, according to the AppData app tracking service. Engagement of nearly 50% is impressively high for any Facebook app, especially one that’s grown this much this quickly. Before the launch in late September, Spotify had 3.4 million monthly actives, with daily active numbers that averaged around half that.

Meanwhile, basically no other music service is even close to Spotify on Facebook — the other ones that launched on Facebook in September have gone nowhere (on Facebook). That’s partially because Facebook seems to have given Spotify special prominence in users news feeds and the ticker for months. Spotify’s Facebook growth is also because Facebook forced Spotify to require all of its users to only log in using their Facebook accounts.

The only other company that has any sort of serious traction on Facebook is internet radio company Pandora, which has 1.2 million daily actives and 9.5 million monthly actives, despite not being involved in the September launch. It’s not clear where that growth is coming from, other than purely organic growth. 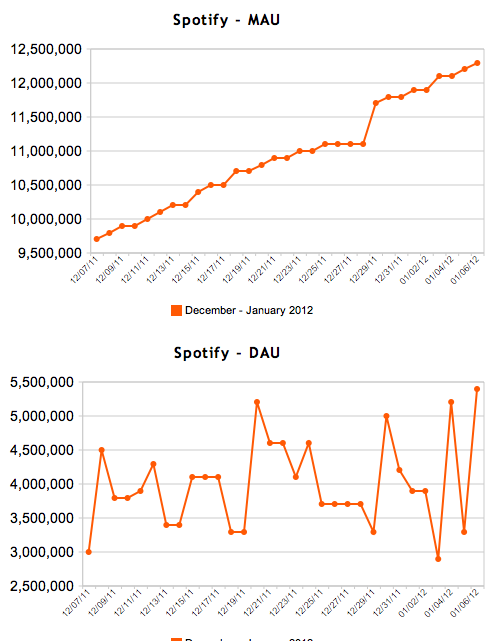